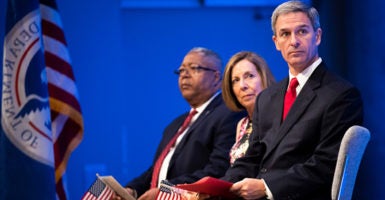 On Tuesday, Cuccinelli attended a ceremony at the National September 11 Memorial & Museum in New York as 52 persons from 28 countries became U.S. citizens.

“This is a vivid reminder of the resiliency of our nation and why so many people around the world make sacrifices each day in order to call the United States their new home,” Cuccinelli, 50, tweeted.

In another tweet Wednesday, Cuccinelli called on Congress to step up and address the country’s immigration crisis.

The left and the media recently accused Cuccinelli of placing “blame” on the Salvadoran father who died with his 23-month-old daughter while they tried to illegally cross the Rio Grande River from Mexico into the United States.

A photo of the entwined bodies of Óscar Alberto Martínez Ramírez and his daughter Valeria was on the front page of The New York Times, among prominent play in other media outlets.

Asked in a CNN interview if the deaths were the fault of Trump administration policies, Cuccinelli said: “No, in fact, just the opposite.”

“The reason we have tragedies like that on the border is because those folks—that father didn’t want to wait to go through the asylum process in the legal fashion, so [he] decided to cross the river and not only died but his daughter died tragically as well,” he said.

“Until we fix the attractions in our asylum system, people like that father and that child are going to continue to come through a dangerous trip,” added Cuccinelli, former president of the Senate Conservatives Fund, a political action committee, as well as Virginia’s attorney general from 2010 to 2014.

Citizenship and Immigration Services is the agency within the Department of Homeland Security that oversees the nation’s naturalization process and system of legal immigration.

With 19,000 employees and contractors, USCIS in fiscal year 2018 adjudicated more than 8.7 million lawful immigration matters, including citizenship, green cards, and other matters.

“Ken Cuccinelli was a great pick by the president for USCIS,” Hans von Spakovsky, a senior legal fellow at The Heritage Foundation, told The Daily Signal. “He was an outstanding attorney general in Virginia and is exactly what the president needs: a by-the-book, rule-of-law lawyer who understands enforcing the law.”

Here are four things to know about the acting head of USCIS, who took the position June 10.

A graduate of what is now Antonin Scalia Law School at George Mason University, Cuccinelli practiced law for about 25 years.

He served in the Virginia state Senate from 2002 to 2010. A conservative Republican, he represented the Fairfax area—part of the liberal Northern Virginia region of the state.

In 2009, Cuccinelli was the Republican nominee for attorney general of Virginia. In a GOP sweep that included the offices of governor and lieutenant governor, Cuccinelli defeated Democratic nominee Stephen C. Shannon with 58% of the vote.

Among his top priorities was fighting human trafficking. According to USCIS, Virginia had been one of the worst states in combating the practice, but by the time he left office in 2014, it was one of the best in the country.

During his first year in office, he waded into illegal immigration when he issued a legal opinion regarding a Prince William County law requiring police to check the immigration status of those they arrested. The county law was similar to a controversial law passed in Arizona.

On Aug. 2, 2010, Cuccinelli wrote that “law enforcement officers, including conservation officers may, like Arizona police officers, inquire into the immigration status of persons stopped or arrested.”

This came after Cuccinelli, in July, joined eight other Republican state attorneys general in an amicus brief defending Arizona’s law against a Justice Department lawsuit during the Obama administration.

Cuccinelli’s suit was separate from the 26 attorneys general who sued to abolish Obamacare by challenging the “individual mandate” for Americans to buy health insurance. The Virginia lawsuit specifically defended a bill passed by the Virginia General Assembly that opposed any federal mandate requiring Virginia residents to buy insurance plans.

Cuccinelli won at the district court level when a federal judge found Obamacare unconstitutional. However, the 4th U.S. Circuit Court of Appeals reversed that decision, and determined that Virginia lacked standing to sue.

The Supreme Court, in a 5-4 vote in 2012, held Obamacare constitutional in the case brought by the 26 attorneys general.

Cuccinelli ran unopposed for the Republican gubernatorial nomination in 2013 after then-Lt. Gov. Bill Bolling opted not to run when the party decided to hold a state convention instead of a primary.

McAuliffe was a heavy favorite to win, with a commanding lead in polls. The ally of Bill and Hillary Clinton also raised $8.1 million, compared to Cuccinelli’s $2.1 million.

Moreover, right-leaning Libertarian Party nominee Robert Sarvis was pulling 3% of the vote, most of which likely would have gone to a Republican nominee.

Nevertheless, on Election Day, the count was surprisingly close as McAuliffe won with 2.6% of the vote.

Cuccinelli said at the time that “this race came down to the wire because of Obamacare.”

After his tenure as attorney general, Cuccinelli joined the “Right on Crime” movement to advocate criminal justice reform. The goal was to gear prison inmates toward integration back into society upon release, reduce recidivism, and cut sentences for nonviolent drug offenses.

Cuccinelli was a strong advocate for the First Step Act, the bipartisan prison reform bill that President Donald Trump signed into law in late 2018.

In a piece for The American Spectator, Cuccinelli wrote:

Criminal justice reform is engineered to incentivize participation in substance-abuse treatment and other recidivism-reduction programs, or otherwise to curb overly punitive sentences which may extract their pound of flesh but also rapidly lose their effectiveness as one moves down the offense severity ladder.

To summarize, weightier factors besides simply ‘locking up’ criminals must be at play to account for crime reduction. Ascribing that reduction solely to lengthy sentences is a theory that doesn’t play well with the data—especially given the fact that 30 states have recently experienced crime rate reductions while simultaneously reducing their prison populations.