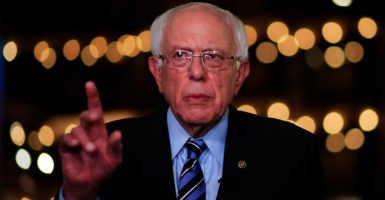 “I do believe that constitutionally we have the power to rotate judges to other courts. And that brings in new blood into the Supreme Court," said Sen. Bernie Sanders, I-Vt., pictured at the Democratic debate in Miami in June. (Photo: Cliff Hawkins/Getty Images)

Efforts to turn judges from impartial umpires into political operatives confirm the axiom that those who cannot remember the past are doomed to repeat it.

The Declaration of Independence lists actions by King George III that justified separating from Great Britain. The king, for example, had “made Judges dependent on his Will alone for the tenure of their offices, and the amount and payment of their salaries.”

America’s Founders responded with constitutional guarantees of judicial service during “good Behaviour” and prohibiting Congress from diminishing their compensation.

Knowing the dangers of political leaders trying to manipulate the judiciary, Alexander Hamilton wrote that the “complete independence of the courts of justice” is “peculiarly essential” in our system of government.

The oath of judicial office required by federal law requires judges to “administer justice without respect of persons” and to “impartially discharge” their judicial duties.

On June 27, Sen. Bernie Sanders, I-Vt., promised that he would “never appoint any, nominate any justice to the Supreme Court unless that justice is 100% clear he or she will defend Roe. v. Wade.”

In other words, justices like these would not be able to do what their oath of judicial office requires.

Such ideological litmus tests, extracting advance commitments about deciding future cases, are not new but they are increasingly common, especially on the left.

In 1993, when Supreme Court nominee Ruth Bader Ginsburg appeared before the Senate Judiciary Committee, she said her rule was to give “no hints, no forecasts, no previews.” Doing so, she explained, “would display disdain for the entire judicial process.”

Sanders continued, saying, “I do not believe in packing the court.” But he also said:

I do believe that constitutionally we have the power to rotate judges to other courts. And that brings in new blood into the Supreme Court and a majority, I hope, that will understand that a woman has the right to control her own body and the corporations cannot run the United States of America.

By “packing the court,” he likely meant increasing the number of  Supreme Court justices so that a president can make new appointments, as President Franklin Roosevelt recommended but Congress rejected in 1937.

The Democratic-led Senate Judiciary Committee described it as a “declaration” that Congress would respond to rulings it didn’t like by “enlarging the Court.”

Changing the Supreme Court’s composition by rotation rather than by expansion, however, is a distinction without a difference. Its purpose is still to create a majority of justices who will do the political bidding of the president who appointed them.

This rotation idea has other problems, including obvious conflicts with the Constitution. First, by providing that judges appointed to life-tenured federal courts may serve “during good Behaviour,” the Constitution makes the impeachment process the only method for involuntarily removing them.

Empowering the president to do so whenever he wants, at least with Supreme Court justices, would require a constitutional amendment.

Second, an important unstated detail is the judicial status of Supreme Court justices who are rotated to lower courts.

Today, judges who serve “by designation” on other courts do so by choice and only for individual cases.

Sanders’ proposal, however, would allow a president to remove a Supreme Court justice in active service and send him, even involuntarily, to a lower court. A newly president could do so to a justice appointed just a year or so earlier by his outgoing predecessor.

Third, Sanders has not indicated whether a Supreme Court justice removed by rotation would remain a justice for the rest of his or her judicial career but serve, for years or perhaps decades, on a lower court.

If form is to follow function, would a justice rotated to a lower court actually become a judge on that court?

Fourth, rotating a justice off the Supreme Court and converting his or her status to a judge on the new court would run afoul of both constitutional protections for judicial independence mentioned earlier.

It would allow a president to effectively make an appointment to that court without Senate consent. And it would result in decreasing the former Supreme Court’s compensation.

Judges on the U.S. Court of Appeals, for example, make 14% less and judges on the on the U.S. District Court make 19% less that Supreme Court justices. If the Constitution prohibits Congress from reducing judicial compensation, how could the president do so by “rotation”?

Fifth, the Constitution does not empower presidents to make general appointments to undefined positions somewhere in the judiciary, and to move them around whenever they choose.

As mentioned above, judges may choose to sit by designation for individual cases on other courts.

But Sanders’ proposal would not depend on the justices’ own choices but could, in effect, banish a justice he did not like to some other court for the rest of his judicial life.

These are just a few problems, but you get the point.

While “rotation” is simply packing the Supreme Court by other means, the Roosevelt court-packing proposal at least had the virtue of being constitutional.

Either one would destroy what Chief Justice William Rehnquist once called one of the “crown jewels” of our system of government, the independence and impartiality of the judiciary.

It would, in Ginsburg’s words, show disdain for the entire judicial process.

This article has been modified since publication since an earlier draft was accidentally published.