‘Prosper Africa’ Promises Long-Overdue Change in US Approach to Continent 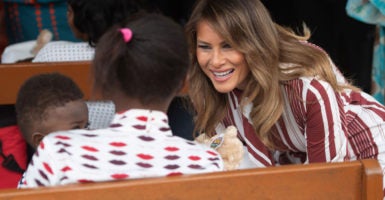 American policymakers have long talked about reorienting U.S. policy toward Africa to “trade, not aid.” Yet, despite the rhetoric, the U.S.’ Africa policy has remained stuck in an aid-focused rut for decades.

However, there was another encouraging sign last week that the Trump administration is serious about changing that.

In remarks at a Corporate Council on Africa event in Mozambique, Deputy Secretary of Commerce Karen Kelley gave more details on the administration’s “Prosper Africa” initiative.

The initiative will be one of the primary vehicles for implementing the pillar of the administration’s Africa strategy that seeks to significantly increase two-way trade and investment between the U.S. and Africa.

The initiative remains under construction, but the newly revealed details include the administration’s intent to harmonize and coordinate the work of the more than 15 relevant government agencies to facilitate U.S. companies’ investments and activities in Africa.

That’s a welcome streamlining and mobilization.

Only 10 African countries rank in the top 100 in The Heritage Foundation’s Index of Economic Freedom (and three of those fall into the “Mostly Unfree” category), while five of the index’s 10 worst-ranked countries are African.

One of the laudable elements of Prosper Africa is that it recognizes that the U.S. must adapt to an Africa of growing strategic significance.

An estimated 20 African economies will be growing by 5% or more per year through 2023, and the continent’s combined consumer and business spending will likely reach $6.7 trillion by 2030.

About 30% of the world’s increase in energy demand will likely be in Africa between now and 2040.

The continent also possesses 22 of the 33 mineral commodities critical to the U.S. economy and national defense, and for which the U.S. is more than 50% import-reliant.

They include some of the rare-earth minerals that China, the world’s largest producer, has threatened to use as leverage in the trade war with the United States.

Africa also abuts the Middle East and Europe, and lies on three maritime chokepoints, including the Bab el-Mandeb Strait that connects the Gulf of Aden to the Red Sea.

Last week in Bahrain, a senior naval officer told me that the U.S. Navy considers the Bab el-Mandeb Strait, between the Arabian Peninsula and the Horn of Africa, to be more strategically important than the higher-profile Strait of Hormuz.

China, the U.S.’ primary strategic competitor, recognizes Africa’s importance and has spent the past two decades building extraordinary influence on the continent.

In 2009, it surpassed the U.S. to become the continent’s largest bilateral trading partner. Beijing is a major investor and lender to Africa, and its senior officials routinely visit the continent.

In 2017, China built its first overseas military base in Djibouti, which dominates the eastern shore of the Bab el-Mandeb Strait.

If Beijing establishes a commanding presence in Djiboutian neighbor Eritrea’s deep-water ports at Massawa or Assab, the Chinese military could imperil U.S. access to the critical strait quickly and perhaps decisively in an open conflict.

Prosper Africa can help with these challenges by further empowering one of the U.S.’ great competitive advantages, its private sector.

Having more U.S. companies operating in Africa means more American influence, an ever more important currency as a range of great and medium powers jostle for position in Africa.

American companies profitably engaged in Africa will also contribute to a stronger U.S. economy, a pillar of American might. They can also help entrench private enterprise systems throughout Africa, the surest route out of poverty for the world’s poorest region.

We still have to wait for all the Prosper Africa details to emerge to fully assess it, and the initiative is not being built as quickly as one would hope.

How much funding the administration is willing to devote to Prosper Africa will also be a key metric for assessing whether it can be an important tool for advancing U.S. interests in Africa.

Nevertheless, last week in Mozambique is reason to be encouraged that an American shift to “trade, not aid”—with all the benefits that would bring to both the U.S. and Africa—is gaining momentum.