Why the Supreme Court Got It Right on Gerrymandering 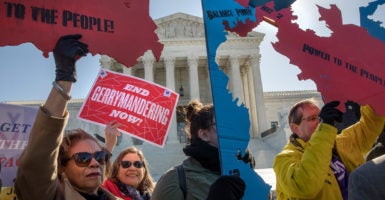 In a much-awaited decision, the Supreme Court held on Thursday in a 5-4 decision that partisan gerrymandering is a political question beyond the reach of the federal courts.

This should come as no surprise, since it’s the same conclusion the court reached the last time this issue was before it in 2004 in a case out of Pennsylvania, Vieth v. Jubelirer.

They argued that such partisan redistricting (i.e. engaging in politics when drawing legislative district lines to benefit candidates of one political party) violated the First and 14th Amendments, as well as the elections clause and Article 1, Section 2 of the Constitution. District courts in both cases ruled in their favor.

However, the Supreme Court, in an opinion written by Chief Justice John Roberts and joined by the other (generally) conservative justices, concluded that this is a nonjusticiable political question for which there is a lack of discoverable and manageable standards.

The chief justice noted that “partisan gerrymandering is nothing new,” and neither is “frustration with it.”

Partisan redistricting was known “in the colonies prior to independence and the framers were familiar with it at the time of the drafting and ratification of the Constitution.”

Yet, the delegates at the Constitutional Convention who drafted the Constitution assigned the authority to draw political boundaries to state legislatures, checked and balanced by Congress, with no suggestion that the federal courts had a role to play in the process.

According to the majority, a contrary decision holding that legislators cannot take their partisan interests into account when drawing lines would countermand the Framers’ own decision.

The claims made by these plaintiffs and by others against partisan redistricting “invariably sound in a desire for proportional representation,” something the Constitution does not require.

In fact, the “Founders certainly did not think proportional representation was required” given that for 50 years after the ratification of the Constitution, “many states elected their congressional representatives through at-large or ‘general ticket’ elections.”

The court also found that there aren’t any “discernible” legal standards in the Constitution for making judgments on what is the “appropriate” share of “safe” seats for political parties, let alone any “limited and precise standards that are clear, manageable, and politically neutral.”

Decisions by judges on what is “fair” in the political realm would be an “unmoored determination of the sort characteristic of a political question beyond the competence of the federal courts.”

The majority opinion was quick to point out that, although partisan redistricting is a political question that the federal courts should not get involved in, this decision “does not condone partisan gerrymandering.”

Neither does the court’s conclusion “condemn complaints about districting to echo into a void.” But remedying this problem is the responsibility of states and Congress, which have the power to reform the process, not the courts.

Roberts said that what the plaintiffs and the dissenters in these cases “seek is an unprecedented expansion of judicial power.”

Such an “expansion of judicial authority would not be into just any area of controversy, but into one of the most intensely partisan aspects of American political life.”

It would be “unlimited in scope and duration” and it “would recur over and over again around the country with each new round of districting, for state as well as federal representatives.”

Roberts is certainly correct about that. There are no manageable judicial standards, no bright line one can draw in the redistricting area on how much politics is acceptable and how much would be too much, and thus a supposed violation of the Constitution.

Moreover, the Supreme Court would have to build its own version of Noah’s Ark to float above the flood of redistricting litigation that would have erupted in the federal courts if partisan redistricting had been recognized as a constitutional violation.

Justice Elena Kagan, joined by her liberal colleagues, virulently dissented, claiming that the majority was refusing to remedy a constitutional violation.

She also claimed that the lower federal courts had come up with an applicable legal standard, a claim that is open to great dispute.

Nonetheless, this is the right decision by the court. As Roberts said in his conclusion, “no one can accuse” the Supreme Court of “having a crabbed view of the reach of its competence.”

But whatever competence the court may have, it has no “commission to allocate political power and influence in the absence of a constitutional directive or legal standards to guide” them.

This is an example of the “rare circumstance” where it is the Supreme Court’s “duty to say ‘this is not the law.’”