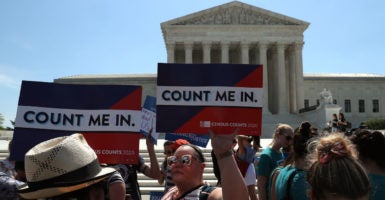 People gather in front of the U.S. Supreme Court as decisions are handed down on June 27 in Washington, D.C. (Photo: Mark Wilson/Getty Images)

The Supreme Court’s Thursday decision relating to the 2020 census split a baby that should have remained whole.

The question at hand was whether the Trump administration could add a question about citizenship to the 2020 census. The court found that adding such a question would not violate the Constitution, but that the administration’s justification for doing so—enforcing the Voting Rights Act—may have been “contrived.”

It sent the case back to the lower court for further findings.

That means the secretary of the Commerce Department, which controls the census, gets to fight another day and can justify its decision another way.

The Trump administration should not give up, but instead should fight to justify including the question before time runs out and the Census Bureau has to print out the census forms.

On the whole, we agree with Justice Clarence Thomas’ partial dissent that “our only role in this case is to decide whether the secretary complied with the law and gave a reasoned explanation for his decision. The court correctly answers these questions in the affirmative. That ought to end our inquiry.”

However, that is not what happened, and so the administration must act fast. Failure to do so would be a victory for a very well-organized left and for the administrative state.

This decision should have been uncontroversial and downright boring. Indeed, this issue should have never come to the court in the first place.

It was only there because leftist groups that have controlled the census for decades have spent two years throwing the mother of all tantrums. One can only conclude that they don’t want accurate data on the number of noncitizens in the country.

Conservatives should pay heed and recognize that if the census is this important to liberals, it is probably of some value to conservatives, too.

They should follow this 2020 census effort by eliminating all race categories from the 2030 census, as these constitute the warp and woof of the identity politics ideology that these advocacy groups push.

These challengers—including the Mexican American Legal Defense and Educational Fund and Asian Americans Advancing Justice—have pursued a full-court press, oratorically and legally, since the Trump administration announced two years ago it wanted the citizenship question reinstated on the 2020 census for the first time since 1950.

(Yes, reinstated. The question previously appeared on census forms dating back to 1820, at the recommendation of President Thomas Jefferson.)

The left’s unfair, inflammatory rhetoric has been over the top.

“The American people will not tolerate the Trump administration exploiting the census in order to carry out their racist and xenophobic policies,” claimed Michael Brune of the Sierra Club.

“This egregious citizenship question is a political effort to weaponize the census to redefine American democracy,” said Vanita Gupta, president and CEO of the Leadership Conference Education Fund.

On the legal front, these groups first filed a lawsuit against the administration in New York City, which culminated in the January decision by a federal judge in Manhattan (an Obama appointee) that the administration had violated the Administrative Procedures Act by acting in an “arbitrary and capricious” manner.

In a similar case, a second Obama appointee in San Francisco held that asking a citizenship question is “unconstitutional.”

It was these cases that came before the Supreme Court.

The leftist organizations didn’t stop there. They kept throwing things against the wall hoping something would stick.

In early June, they released information in a document prepared years ago by a deceased Republican redistricting expert. The document was found by his estranged daughter among his possessions and forwarded to the challengers.

The so-called smoking gun document showed that if citizen population was used to draw electoral maps in Texas, rather than total population, Republicans and non-Hispanic whites might benefit—hardly earth-shattering news.

Indeed, the truth is that in other states, this would also benefit Hispanics—a large umbrella group that covers Americans of many origins, many of whom vote for Democrats.

In a move that evokes the left’s desperation during the Kavanaugh hearings, liberals trotted out the information, claiming—without any proof whatsoever—that the Justice and Commerce departments had “relied” on this information in making the decision to reinstate the citizenship question.

The administration’s lawyers vigorously denied this unsupported and unproven claim, which activists sent to the Supreme Court late in the game, well after oral arguments, as it was preparing to issue its decision.

Did these strategies play a role in the court’s decision? It’s hard to say. If so, then the justices who remanded the decision to the lower court gave in to an organized mob.

But let us all put aside the last-minute theatrics and the legal sleight of hand, and get right down to the point of this entire controversy.

My friend Jim Geraghty hits the nail on the head when he writes in National Review that many leftists want to live in a borderless world where the nation-state just withers away.

The problem is that democracy, the rule of law, and the very concept of human rights are territorially constrained and protected.

Natural rights may be universal, but the laws that protect these rights, and the cultures that underwrite these laws, are very much local to the nation.

Groups like the Mexican American Legal Defense and Educational Fund, Asian Americans Advancing Justice, La Raza (now known as UnidosUS), and the National Association of Latino Elected and Appointed Officials have for decades used the census to break up and divide Americans into racial and ethnic identity groups—a triumph for them and for identity politics, but a disaster for America’s sense of national cohesion.

These groups are examples of what the social scientist Peter Skerry calls “elite network insiders.”

These groups have “weak community ties,” but they win policy fights because they partake in “a process of specialization and professionalization by which politics become more and more an insiders’ game.”

The racial identities that they’ve intimidated the Census Bureau into adopting are “highly useful to elite-network insiders who are in need of some cogent category that subsumes the disparate population they aspire to represent.” But such categories do no good to the people themselves, or to the nation.

One of the platforms for these organizations is the Census Bureau’s National Advisory Committee on Racial, Ethnic, and Other Populations, where many have a seat.

As I wrote in Quillette a few months ago, few Americans have heard of this committee, but, “along with bureaucrats in other agencies, and various non-governmental ‘stakeholder’ groups on the left, the [committee] has for decades controlled the policy by which demographic data—the seedbed of identity politics—is collected and interpreted.”

On June 14, President Donald Trump issued an executive order to re-evaluate all national advisory committees and eliminate at least a third of them. The census committee, which fought the citizenship question so hard, should be one of the first to go.

So, what should happen now?

The Commerce Department should fight for the citizenship question by providing a new explanation.

The administration should then rescind the 1977 Office of Management and Budget directive that first artificially created pan-ethnic identity groups, such as “Hispanics,” as well as the 1997 revision of that directive.

It’s time we moved back to a culture and society where we consider all Americans to be one people—e pluribus unum (out of many, one)—that are not divided by their skin color or ethnic or family background.