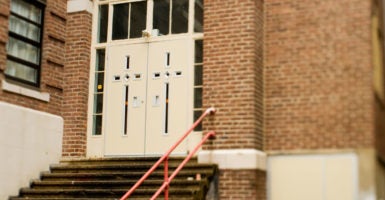 Bethel Christian Academy (not pictured) in Maryland was told by state officials that it can’t participate in a voucher program anymore because of its biblical beliefs on marriage and sexuality. (Photo: andipantz/Getty Images)

Don’t say America wasn’t warned. During the oral arguments for same-sex marriage in 2015, a question came up about the fallout for Christian education.

Four years later, that prophecy is coming to pass. Out in Maryland, a Christian school was told by state officials that it can’t participate in the voucher program anymore because of its biblical beliefs on marriage and sexuality.

The leadership of Bethel Christian Academy was stunned. After all, it relied on that money to serve the school’s 280 low-income kids. For two years, those vouchers were what made their option to public school possible.

Now, intolerant bureaucrats are telling Bethel that not only is it barred from the program, but it has to pay back the $100,000 it received—which, to a small academy like this one, is a financial death sentence.

Nothing about its programs should be controversial. And until last year, nothing was. That’s when the Maryland Department of Education disqualified the academy after looking through the school’s handbooks.

In them, officials found statements of Bethel’s biblical beliefs on marriage and sexuality. And according to state officials, that’s discrimination.

But if there’s any discrimination, it’s not from Bethel Academy. As ADF’s Christiana Holcomb explained, the school has never turned anyone away based on their sexuality. All it does is ask that students maintain a biblical standard of intimacy, as the Bible teaches.

And hopefully, with this lawsuit against the state, they’ll get it. Until then, every private school is on notice: When it comes to state programs, Christians need not apply.

This article has been corrected to reflect that Bethel Christian Academy is a private school.