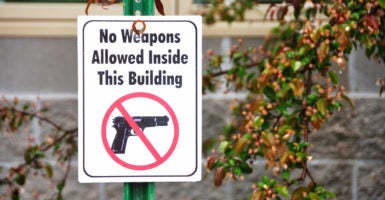 A Virginia Beach engineer is starting a petition to allow licensed personnel to bring their guns to work. (Photo: Steverts/Getty Images)

A Virginia Beach employee is circulating a petition to abolish the city’s policy barring employees from bringing guns into work if they are properly permitted.

Vincent Smith, an engineer who worked in Building 2 where the recent shooting occurred, posted a petition on Change.org asking the city to amend its employee weapons ban so properly licensed personnel may bring their gun to work, local CBS affiliate WTKR reported.

“People are forced, like I am every day, to choose between earning a living and saving my life,” Smith told WTKR.

“I want a real consideration by council and a real discussion about changing the policy that the city has to something that doesn’t just forbid employees to have weapons but something that includes an allowance for people to take a personal level of responsibility for their own safety,” he said.

Smith wasn’t in the building during the May 31 shooting that left 12 people dead, including shooter DeWayne Craddock. The shooting occurred on multiple floors of Building 2 of the Virginia Beach Municipal Center, reported CNN.

Smith also said he doesn’t believe that everyone with a concealed carry permit should be instantly granted the right to bring their gun to work without meeting additional criteria.

“I see a program where employees are vetted through background checks and psychological screenings on a regular basis,” Smith said.

Smith is also his building’s evacuation manager, and long recognized a “gap” in security because qualified employees could not carry a firearm into the building.

In 2016 he drafted a petition to change the policy and collected 260 signatures, one of which was Bert Snelling’s, an outside contractor killed May 31.

“Had I gotten these changes effective on May 30 we would be looking at a very different May 31,” Smith added.