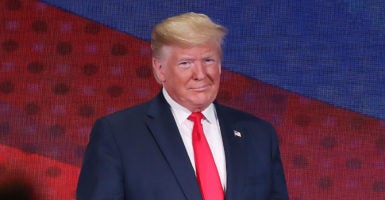 Fun fact: I’ve been crocheting since I was 10, when my Tita Lisa taught me the magic of granny squares.

Fellow yarn nerds will understand the heavenly bliss of spending hours at Hobby Lobby or Walmart immersed in a sea of alpaca, mohair, angora, super bulky and super saver skeins for blankets, baby clothes, hats, headbands, scarves, bookmarks, and potholders. (Yes, I’ve made them all!)

I passed on the tradition to my artsy teenage daughter; teaming up on a Christmas afghan for my dad last year was one of my favorite ever projects.

Are you surprised? You shouldn’t be. Creativity and crafting transcend political ideology—or so you might think.

This week, Ravelry.com, one of the internet’s most popular gathering sites for crocheters and with a reported 8.5 million users, publicly smeared and ejected conservative members who support President Donald Trump—all in the name of protecting its preciously “inclusive” safe space.

Excluding to include. Welcome to opposite world. On Sunday (there’s no rest for vengeful social justice warriors), Ravelry’s founders announced:

We are banning support of Donald Trump and his administration on Ravelry. This includes support in the form of forum posts, projects, patterns, profiles, and all other content.

The progressive operators at Ravelry declared that every right-winger on the fiber arts forum who supports our commander in chief is really just a KKK domestic terrorist wielding sharp needles instead of flaming crosses and nooses.

It doesn’t matter whether you support the White House because you are pro-borders, pro-life, pro-entrepreneur, pro-limited government, anti-collectivist, or anti-socialist.

“We cannot provide a space that is inclusive of all and also allow support for open white supremacy,” Ravelry management declared.

In case you weren’t clear on Ravelry equating all Trump support with virulent racism, the defamers decried: “Support of the Trump administration is undeniably support for white supremacy.”

But here’s the thing I know from being in contact with conservative knitters and crocheters over the past decade: Ravelry’s ideological bigotry is not just about Trump. They simply cannot countenance anyone in their community who disagrees with them on any political matter.

During the 2008 presidential election season and into 2009, I heard from Republican hobbyists whose lively discussion boards were shut down on Ravelry.

Janna S. wrote to warn that “while this may not be making waves in the headlines, there is an upswing in conservative censorship that has hit cyberspace.”

A group on Ravelry called “The Bunker,” which had more than 200 members who discussed GOP politics and knitting patterns, was singled out and shut down after liberal, pro-Obama members complained about its presence.

Ravelry accused the conservative crafters of a “culture of anger and “us versus them” stance.

One of the Bunker’s active members, Melissa, reported to me that Ravelry co-founder Casey Forbes had replied to right-leaning users asking how peacefully expressing their opinions violated their terms of service by “making excuses for the fact that he just doesn’t like conservative people on his website. … Many of our members are mothers or grandmothers and are completely harmless. We’ve all been discriminated against because we think and believe differently.”

Meanwhile, rabid leftists who promoted misogynist sweaters slamming Sarah Palin as “c—-” went unpunished. A forum titled “What Would You Do To Sarah Palin” inviting liberal members to post physical threats was allowed to thrive.

“The problem here is not that the site owners decided that they didn’t want an active, vocal conservative group on their site. That is certainly their right as site owners,” Melissa noted. “The issue is the double standard and the denigration of the reputations of all members of The Bunker and the injury and/or destruction of some members’ businesses. The far-left is not only tolerated on Ravelry, they are nurtured and encouraged. Their bad behavior goes unchallenged.”

This was more than 10 years ago, mind you, long before the latest wave of suppression, shadow-banning, algorithm-rigging, de-platformings, and defamation of right-minded people by Twitter, Facebook, and Google/YouTube.

The speech-squelching imperative of the far left is a thread that traces back to the 1960s, when radical philosopher Herbert Marcuse popularized the “repressive tolerance” theory of modern progressives.

In advance of the 2020 election, no space in the internet square is safe from “inclusive” exclusion.

Silicon Valley’s overlords, like Ravelry’s petty tyrants, have no interest in promoting diversity, discussion, and community. They are bent on decimating debate and dissent while wrapped in thick, woolly blankets of hypocrisy and sanctimony.