‘I Don’t See It Happening,’ Says Trump on Reparations 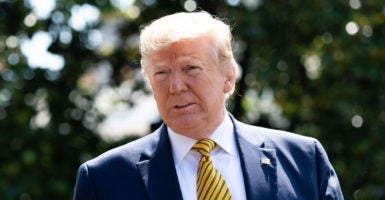 After a spirited hearing on whether the U.S. should explore the idea of reparations for the descendants of slaves, President Donald Trump says he does not foresee the federal government pursuing  the idea.

“I don’t see it happening,” Trump told The Hill in an interview Monday.

“I think it’s a very unusual thing,” Trump said. “You have a lot of—it’s been a very interesting debate. I don’t see it happening, no.”

The June 19 hearing on reparations held by the House Judiciary subcommittee on the Constitution and civil rights discussed HR 40, a bill that would order a study on how to make reparations crafted to compensate descendants of African American slaves.

The bill was introduced in the House by Rep. Sheila Jackson Lee, D-Texas, with 64 co-sponsors, including Sens. Kamala Harris and Bernie Sanders.

“It is historic, it is urgent,” Booker said. He also called the discussion “a very important hearing.”

Booker, 50, cited racial disparities in prison, education, and health outcomes to justify reparations. Drawing upon personal experiences from where he was raised in and around Newark, the senator and presidential candidate said the poverty and violence in the African American community he saw can be attributed to slavery.

A day before the hearing, Senate Majority Leader Mitch McConnell, R-Ky., voiced his opposition to reparations.

“I don’t think reparations for something that happened 150 years ago for whom none us currently living are responsible is a good idea,” McConnell said in a press conference. “We’ve tried to deal with our original sin of slavery by fighting a civil war, by passing landmark civil rights legislation. We elected an African American president.”

Coates, an award-winning author who argued for reparations in a column in The Atlantic magazine, responded to McConnell’s remarks during his testimony.

Coleman Hughes, a black columnist for Quillette and philosophy student at Columbia University who identifies as a Democrat, caused some to boo his testimony against reparations.

The booing was met with disapproval by subcommittee Chairman Steve Cohen, D-Tenn., who told the audience to “chill” numerous times.

Others who testified include Katrina Browne, descendant of one of America’s largest slave-trading families; retired NFL player Burgess Owens; and the Rev. Eugene Taylor Sutton, among others.