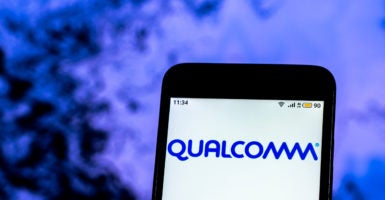 Every so often, a case comes along that screams government misuse of power. The Federal Trade Commission’s antitrust lawsuit against Qualcomm Inc. is just such a case, and thus warrants scrutiny.

The commission’s action was questionable from the start, based entirely on conjecture and allegations raised by antagonistic competitors—China’s Huawei included. Even the Department of Justice expressed misgivings about the prosecution.

The May 21 ruling against the company by U.S. District Judge Lucy Koh compounded the injustice.

In the absence of evidence that Qualcomm’s business practices harmed competition, the judge ignored real-world data to the contrary and ruled instead that Qualcomm’s actions might cause harm. Moreover, she cited Qualcomm’s success as de facto proof of monopolistic misbehavior.

Alas, judicial overreach and regulatory heavy-handedness are prevalent these days, reflecting the imperiousness of the administrative state and, in this instance, the revival of progressive-era antitrust dogma.

Despite a fiercely competitive wireless market and robust indicators of consumer welfare, two Obama-appointed commissioners and a federal district judge effectively decided that they are better equipped to manage wireless network licensing and chipset prices than those who actually produce and purchase the technology.

Some background: Qualcomm develops and manufactures mobile technologies, including modems for cellular phones and the Snapdragon processors to run them.

The company supplied chipsets and other wireless network elements for hundreds of millions of Apple iPhones from 2011 to 2017, among others. The companies’ association generated sizable profits for both, as well as protracted litigation.

The Federal Trade Commission filed its antitrust complaint against Qualcomm on Jan. 17, 2017—a mere three days before the end of the Obama administration.

Only 3 of 5 commissioners were active at the time, and the vote to proceed with the case was split 2-to-1. The single “no” vote was cast by then-Commissioner Maureen K. Ohlhausen, who denounced the lawsuit as “an enforcement action based on a flawed legal theory that lacks economic and evidentiary support.”

It is widely known that the commission and company signed a “common interest agreement,” which allowed them to secretly share information and coordinate their legal strategies.

But it is largely unknown that internal Apple documents describe how, in an effort to “[r]educe Apple’s net royalty to Qualcomm,” Apple planned long before filing suit to “[h]urt Qualcomm financially” and “[p]ut Qualcomm’s licensing model at risk,” by filing lawsuits with claims similar to those of the Federal Trade Commission.

Whether the commission was an unwitting player in Apple’s plans is unknown.

Ohlhausen’s objections to the commission’s filing were entirely validated during the 11-day bench trial, which concluded on Jan. 29, 2019.

The commission’s lawyers and witnesses proffered plenty of unsubstantiated theories about Qualcomm’s (purported) abuse of monopoly power and subsequent “strangling” of competition and innovation—but no empirical research to prove that Qualcomm’s business practices produced artificially high prices or restricted supply.

In fact, Qualcomm’s licensing framework has been an industry standard for decades, and the commission’s theories are contradicted by real-world data.

The commission targeted what it called Qualcomm’s “no license-no chip policy,” claiming that the company threatened to withhold chips from handset manufacturers to extract unduly high payments for the bundle of patents necessary to operate the phones and to access the cellular network.

Qualcomm’s (purported) chip monopoly was said to have increased its negotiating leverage, thereby forcing phone manufacturers to accede to the inflated royalties.

The rates were also imposed on handset manufacturers who sourced chips from other companies because Qualcomm’s bundle of patents is essential to the functioning of the wireless network.

According to the commission attorneys, the royalty rates demanded by Qualcomm constituted a “tax” on competing chip manufacturers by eroding their price advantage, if any.

In reality, chip demand expanded in the market defined (artificially) by the commission, and the average price of smartphones declined by more than 30% between 2010 and 2017. Qualcomm’s market share also declined (in the defined market), while companies such as MediaTek, Samsung, Huawei, and others all gained share.

Perhaps most telling, Qualcomm did not increase royalty rates as its market share expanded, nor did it halt chip shipments for negotiating leverage—both of which contravene the commission’s theory.

The burden of proof in this type of antitrust case is supposed to be evidence of actual harm, according to Senior Circuit Judge Douglas Ginsburg of the Court of Appeals for the District of Columbia, and professor of law Joshua D. Wright of George Mason University School of Law (himself a former commissioner).

“[W]hile the risk of anticompetitive foreclosure is real,” they wrote, “courts have sensibly responded by requiring plaintiffs to substantiate their claims with more than just theory or scant evidence that rivals have been harmed.”

The commission built its case around the theoretical assertions of Carl Shapiro, who also was the commission’s expert in its challenge to the merger of AT&T and Time Warner.

In that case, however, U.S. District Judge Richard J. Leon shredded Shapiro’s pronouncements as “assumptions that are implausible and inconsistent with record evidence,” and “not sufficiently grounded in the evidence—a fact that undermine[s] my confidence in the reliability and factual credibility of his projections.”

The Federal Trade Commission lawsuit and subsequent ruling are also problematic for the commission and Koh in light of the recent settlement of all litigation between Apple and Qualcomm.

Opening arguments in Apple’s U.S. lawsuit had just commenced on April 16 when the settlement was announced. In addition to the dismissal of litigation worldwide, the deal includes a six-year patent licensing agreement, a multiyear chip supplier agreement, and an end to all patent disputes between the two companies. Apple will make a $4.5 billion settlement payment to Qualcomm, as well.

Simply put, what is the point of continuing litigation if the principal parties have already settled the disputes?

Alas, the judge also ignored a formal request from the Department of Justice for a hearing “on issues related to a remedy,” further noting that “in fashioning a remedy, the court should take careful consideration of all relevant issues and effects of such a remedy. That includes the principle that, although a proper remedy must restore any competition lost due to actions found to have violated the antitrust laws, a remedy should work as little injury as possible to other public policies.”

By most accounts, the Justice Department is referring to the effect on deployment of the 5G network.

The term “5G” refers to the fifth generation of cellular wireless technology that will move data exponentially faster and in greater volume. It will also dramatically reduce “latency” (the time it takes for a data message to reach its target and initiate a response).

Qualcomm is a global leader in 5G technologies, and the only major American company producing the necessary network elements. It is also the principle competitor to Huawei, also a global provider of technology networks—with annual sales exceeding $86 billion.

There is, understandably, a great deal of concern that severe sanctions would handicap Qualcomm. As noted by the Justice Department:

Indeed, there is a plausible prospect that an overly broad remedy in this case could reduce competition and innovation in markets for 5G technology and downstream applications that rely on that technology. Such an outcome could exceed the appropriate scope of an equitable antitrust remedy. Moreover, it has the distinct potential to harm rather than help competition.

Alas, the Justice Department’s request was summarily dismissed by both the commission and the judge, who has ordered Qualcomm to renegotiate its contracts with customers and competitors worldwide—and for products and markets in which Qualcomm is not a dominant player or which did not exist in the timeframe addressed in the commission’s complaint.

Qualcomm has filed for a stay of Koh’s order and will seek an expedited appeal, company officials have said, noting that the order “threatens to upend the entire wireless communications industry … and undermine incentives to contribute the foundational technology underlying cellular standards and systems.”

A stay of Koh’s order is the least of what is needed to erase the judicial overreach and regulatory heavy-handedness represented by this case. But there is potential for years of additional litigation unless the Federal Trade Commission refrains from appealing an appeals court ruling in Qualcomm’s favor.

It is difficult to imagine that even the 9th U.S. Circuit Court of Appeals would allow Koh’s ruling to stand. But these are the days of the administrative state and the revival of progressive-era antitrust dogma.