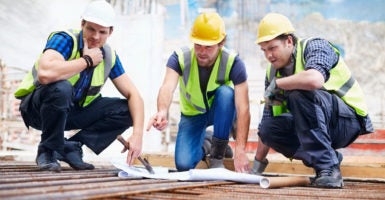 In the name of equality, the state is enforcing a policy of "sameness," writes Nicole Russell. (Photo: Caiaimage/Trevor Adeline/Getty Images)

The British government has adopted a concerning new policy regulating speech. The New York Times reports a new policy banning the use of “harmful” gender stereotypes in advertising—yes, private ads.

The U.K.’s Advertising Standards Authority announced last week that it will “ban ads that connect physical features with success in the romantic or social spheres; assign stereotypical personality traits to boys and girls, such as bravery for boys and tenderness for girls; suggest that new mothers should prioritize their looks or home cleanliness over their emotional health; and mock men for being bad at stereotypically ‘feminine’ tasks, such as vacuuming, washing clothes, or parenting.”

The new policy was developed after a report from the agency supposedly found that ads containing such stereotypes “can lead to unequal gender outcomes in public and private aspects of people’s lives.”

I’m not even sure how this could be quantified, but that’s the springboard for these gender-neutral regulations.

There are several issues to point out here.

First, this is a dangerous incursion on free speech. Admittedly, the U.K. has always lacked the same affinity for free speech that America has, so it’s not completely surprising the public would tolerate this regulation.

But second, there is a more important cultural issue at stake here, one that is also starting to circulate in the United States.

While we can all dismiss certain stereotypes as crass and unwarranted—for instance, that women are worse than men at driving—this policy drives at something deeper and more radical.

In banning a wide range of gender stereotypes, the British government presumes that boys and girls are essentially the same and that any notion of “male” and “female” career tendencies is inherently oppressive.

It has essentially banned private companies from operating on the rational belief that men and women really are different, and that those differences factor into how men and women buy products.

The Advertising Standards Authority has passed similar policies before. A few years ago, it hit Gucci hard for making ads with a model who looked “unhealthily thin,” to name just one example.

I can partially appreciate where this comes from.

As a woman who has seen advertisements of airbrushed women selling makeup or clothing, I know these ads can be misleading and even frustrating. Often these ads perpetuate false stereotypes that can be harmful to a woman’s self-esteem.

And yet, I don’t think a regulation against such stereotypes is the way to go. If people don’t like the ad, they should boycott the company.

But there is a difference between unhealthy stereotypes and ordinary stereotypes that might actually reflect reality. The U.K.’s new regulations ban the latter.

There is nothing wrong with stereotypes that generally reflect reality: Women tend to be drawn to careers with more nurturing aspects; men are often drawn to careers that utilize bravado—like construction or the military, or perhaps the STEM fields.

This doesn’t mean men can’t stay home with the kids or that a woman can’t be an engineer. That’s not the point.

The point is that, in general, there is a career divide that is largely driven by innate biology, not simply society’s expectations for men and women.

There is nothing wrong with stereotypes that generally reflect reality

We know this because in countries that have tried to engineer gender “equality,” like Sweden, there is still a gender divide.

In fact, Scandinavian countries now have lower levels of women entering STEM fields than other countries considered less egalitarian, like Albania and Algeria.

Many of the careers that men and women pursue—and the accompanying stereotypes—exist, and continue to exist, because men and women are naturally drawn to them.

For starters, it’s scientifically proven that men’s and women’s brains are different, and these differences contribute to how both function in different vocational fields.

Consider this piece in Stanford Medicine, which explores the difference:

Women excel in several measures of verbal ability—pretty much all of them, except for verbal analogies. Women’s reading comprehension and writing ability consistently exceed that of men, on average. They out­perform men in tests of fine-motor coordination and perceptual speed. They’re more adept at retrieving information from long-term memory.

Men, on average, can more easily juggle items in working memory. They have superior visuospatial skills: They’re better at visualizing what happens when a complicated two- or three-dimensional shape is rotated in space, at correctly determining angles from the horizontal, at tracking moving objects, and at aiming projectiles.

These are scientific facts. Men and women are different. To neutralize all advertisements that suggest as much—or worse, to flip reality on its head—might actually produce a feeling of shame among boys and girls, and men and women, for wanting to pursue the career that comes naturally to them.

The notion that men and women are wired the same, want the same things, and can do the same things at work or at home is one of the most dangerous myths animating the social-justice left today.

Not only are these things false, but male and female differences complement one another, helping men and women to accomplish equally important, yet often different tasks.

It’s a shame to see the British government bow the knee to political correctness and go into regulatory overdrive, banning stereotypical ads from the public.

This perpetuates the myth that men and women are biologically the same, and refuses to acknowledge that their propensity toward various vocations might just be due to those innate and incredible differences.