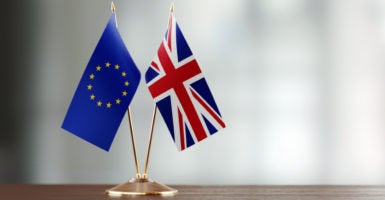 A successful, timely Brexit would not only ensure a truly sovereign and global Britain, but would also provide a tremendous incentive for a U.S.-U.K. free trade agreement, which would advance economic freedom on both sides of the Atlantic. (Photo: Getty Images)

Pollsters had heart palpitations in June 2016 as the people of Great Britain voted to leave the European Union.

A dismayed media spouted speculative hysteria about the British economy that spread faster than a fire at a match factory. Three years after the June 23, 2016, referendum, however, the establishment in Westminster remains incapable of admitting it was wrong.

The reality is that the uncertainty surrounding Brexit has had little obvious effect on the British economy.

Despite doomsday predictions, the British economy since the Brexit vote has not lived down to Brexit opponents’ expectations and has managed to outperform and outrank the other large economies of the European Union.

According to The Heritage Foundation’s 2019 Index of Economic Freedom, the United Kingdom has the world’s seventh-freest economy and scored more than 10 points higher than the regional average.

Three economies that have been integral to the European Common Market since its inception, Germany, France, and Italy, by contrast, ranked 24th, 71th, and 80th, respectively.

The United Kingdom’s economy grew at an annualized rate of 1.4% in the first quarter of 2019. At first blush, that number isn’t particularly impressive, but it quickly becomes commendable when compared with economic performances across the English Channel and parroted economic forecasts.

France grew 0.9% and Germany grew 0.6% in the first quarter, while Italy registered no growth at all. The entire eurozone grew at only 1.1%. Despite predictions of gross domestic product losses of up to or greater than 5%, the British economy has grown every quarter since the referendum.

Unemployment is below 4%, the lowest it’s been since the early 1970s, according to the Office for National Statistics. The unemployment rate in Britain is half the eurozone rate (7.8%), and less than half of Italy’s and France’s at 10.2% and 8.8% unemployment, respectively.

Some 800,000 new jobs have been added since the referendum despite the U.K. Treasury’s predictions of job losses of up to 500,000 after the people voted “leave.”

According to the survey, foreign direct investment has created more than 50,000 jobs in the U.K.—19,000 more than Germany and more than double that of France.

Britain deserves to (and should) become a more dynamic and global hub because trade and investment aren’t solely about market openness—although that remains crucial. It’s also about the rule of law, regulatory efficiency, and government size, areas where Britain performs much better than its regional competitors.

Absent its European Union regulatory shackles, the U.K. will unquestionably be an attractive trading partner for many countries around the world.

A successful, timely Brexit would not only ensure a truly sovereign and global Britain, but would also provide a tremendous incentive for a U.S.-U.K. free trade agreement, which would advance economic freedom on both sides of the Atlantic.

It also would further enhance the special relationship between two of the world’s largest and freest economies.

As Kim Holmes, executive vice president of The Heritage Foundation, penned in a recent commentary:

In the nineteenth century, free trade was liberal Britain’s great cause. Today, it should command the support of liberals and conservatives alike in both countries.

It is an opportunity we must seize.