This New York Man Got Arrested After Defending His Own Home 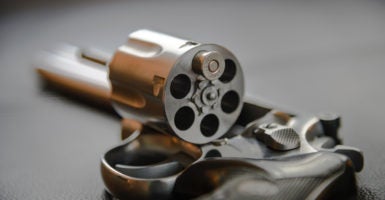 Ronald Stolarczyk was arrested on a felony charge for failing to obtain his own handgun permit and register the gun in his name. (Photo: Pratchaya/Getty Images)

All too often, advocates of strict gun control promise that more complex and convoluted laws will save lives without imposing a serious burden on the right of law-abiding citizens to exercise their constitutional rights.

Their argument simply doesn’t hold up. Their gun control laws fail not only to address how actual criminals get their firearms, but they also impose a real burden on ordinary citizens’ Second Amendment rights. They even risk making felons out of otherwise law-abiding citizens.

If that sounds like an exaggeration, just look to the case of Ronald Stolarczyk of Oneida County, New York. He’s now facing felony charges for lawfully protecting himself against criminals without first getting the county’s permission to possess a handgun in his home—something that would cost him hundreds of dollars and months of paperwork.

The 64-year-old Stolarczyk was “minding his own business in his kitchen” one day when he heard voices coming from his garage. Stolarczyk tried simply waiting for the intruders to leave, but the two assailants soon ascended the stairs and attempted to enter his central living space.

Stolarczyk then yelled at the burglars to leave, hoping that knowledge of his presence would scare them away. The burglars were undeterred by his warning, and one even aggressively advanced toward him.

Stolarczyk now feared for his life, both because his home had previously been broken into and because he was aware of recent home invasions that resulted in the death of the homeowner.

Stolarczyk quickly retrieved his deceased father’s .38-caliber Rossi revolver and fired several rounds at the burglars, both of whom were killed.

After making sure he was safe from all threats, Stolarczyk immediately called the police and walked to the far end of his driveway to wait for their arrival.

Once they arrived, the responding officers investigated the incident and the Oneida County district attorney concluded that the shooting was likely justified, and that Stolarczyk would not face homicide charges.

The state police, however, arrested Stolarczyk on a charge of felony criminal possession of a firearm.

The gun Stolarczyk used had been legally owned by his father, who had properly registered the revolver and lived with it in the same house where the shooting took place.

Stolarczyk came into possession of it after his father died and left him the gun, and nothing legally prohibited him from possessing firearms.

The problem was that he failed to obtain his own handgun permit and register the gun in his name.

Thus, under state law, this otherwise law-abiding citizen was “guilty” of a Class E felony punishable by up to four years in state prison and the permanent loss of his Second Amendment rights.

Additionally, the local government seized possession of Stolarczyk’s house, claiming it was in violation of local housing codes, purportedly because he could not afford running water or electricity and kept the house full of old electronics.

All of this happened because Stolarczyk—who couldn’t even afford a standard cellphone plan—failed to properly jump through all the hoops necessary to gain the government’s permission to possess a firearm in his home for self-defense.

Just How Bad Is the Local System?

Most people would agree that Stolarczyk, an otherwise law-abiding citizen, should not be criminally punished after calling the police on himself to report the justified use of lethal force against burglars.

More concerning, however, is the fact that these charges expose a deeper problem stemming from the severe burden that Oneida County places on residents’ Second Amendment rights.

To fully appreciate how inappropriate these charges are, we decided to find out exactly what it takes to obtain a pistol permit in Oneida County—again, the only thing Stolarczyk allegedly failed to do properly here.

It turns out that, after a lengthy investigation, we’re still not certain we fully understand the process. Our best educated guess is something like the following:

First, anyone interested in owning a handgun must pick up the application in person, which can only be done at the Oneida County Office Building. But prepare to take time off work, because this building is only open Monday through Friday from 8:30 a.m. to 12 p.m., and 1 p.m. to 3:30 p.m.

Alternatively, if you live on the opposite side of the county and want to avoid a 50-minute drive to Utica, you can try the Griffiss Business and Technology Park office, open on Thursdays between 8 a.m. and 12 p.m.

Once at the Office of Pistol Licensing, you’ll need to present a New York state driver’s license proving that you’re at least 21 years old and have lived in Oneida County for at least one year.

You also must provide a certificate of completion for an NRA Basic Pistol Course, which lasts approximately eight hours and must be led by a county-approved instructor.

After calling many of the recommended instructors, we learned that the introductory course can cost anywhere between $40 and $165 and that classes aren’t necessarily offered on a regular basis.

Further, had we not called these instructors and the licensing office itself for clarification, it would have been nearly impossible to determine which courses Oneida County does and does not accept to meet the requirement.

Finally, after paying a $10 processing fee to the county, you can receive the application form and begin the process of seeking the county’s permission to own a gun in your own home.

The application itself consists of five parts, which must be completed in black ink, and all signatures on the form must be notarized. Two identical head shot photographs no larger than 2 x 2 inches must be attached to the application.

Each application also requires four notarized character references from individuals 21 years of age or older, who are not related to the applicant, and who reside in Oneida County.

After completing the application, you will be responsible for paying several additional fees for processing and fingerprinting. These include $150 to the Oneida County Sheriff’s Office, $100 to the Utica Police Department, or $50 to the Rome Police Department, depending on the jurisdiction in which you reside.

There will then be a six-month waiting period for processing, after which you’ll be informed whether your application was accepted or denied. Denials can occur for a myriad of reasons, including seemingly arbitrary determinations by the application processor that you are not “of good moral character.”

This is the complex and costly system that Stolarczyk—who couldn’t afford to keep his lights on—needed to navigate in order to legally own the revolver that may have saved his life.

That’s not to say the government can never impose any requirements on gun owners, or regulate the manner in which firearms are purchased or carried outside the home. The Second Amendment right, like all other enumerated rights, is not unlimited.

But examples like this make clear that laborious and costly gun licensing requirements impose substantial and undue burdens on the exercise of the right to keep and bear arms—burdens we would never allow to be imposed on another fundamental constitutional right.

Worse still, these burdens fall heaviest on the shoulders of those who, unlike many of the wealthy politicians calling for gun control, can’t afford to live in gated communities and will never receive a police escort.

No level of government—be it federal, state, or local—should get away with imposing such great barriers to exercising a constitutional right.

It certainly shouldn’t punish individuals whose only crime was failing to properly navigate a nightmarishly complex and expensive web of bureaucracy prior to defending their life, liberty, and property with a handgun.

This article has been updated since first publication to clarify the author’s views on the prosecutor and has been corrected to reflect that state police arrested Ronald Stolarczyk—the Oneida County district attorney did not charge him.