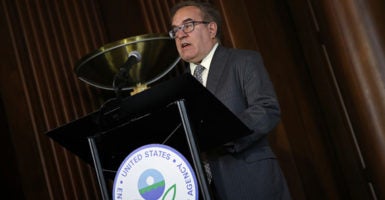 The Environmental Protection Agency on Wednesday announced a new rule to grant more flexibility for states in regulating coal-fired power plants, replacing the Obama-era regulation that was halted by the U.S. Supreme Court.

The Affordable Clean Energy rule under the Trump administration replaces the Obama administration’s Clean Power Plan, which would have required an eventual energy policy shift for the entire power grid from coal to natural gas.

The Trump EPA rule sets up emissions guidelines for states to apply when crafting their own plans to limit carbon emissions at coal-fired power plants.

“I do expect some litigation, but I also expect this to prevail in court. We pay very close attention to the past court precedent. We are following the Clean Air Act,” EPA Administrator Andrew Wheeler told The Daily Signal during a press gaggle after an hourlong event at EPA headquarters in Washington that included members of Congress, Trump administration officials, business and union leaders, and coal miners in an audience of about 200.

Attorneys general in 27 states had sued over the Obama Clean Power Plan, arguing that it exceeded the authority Congress granted the EPA under the Clean Air Act by setting measures that could not be achieved by individual coal-burning plants. The Supreme Court issued a stay on the rule in February 2016.

“They were trying to direct public policy without following the law. What we are trying to do is follow the four corners of the Clean Air Act, the previous district court and Supreme Court precedent, and put forward a regulation that can stand up to court challenges and will be implemented across the board.”

“Not only was it illegal, it’s a tax on ordinary working Americans. That’s wrong, and he didn’t like that very much,” he said.

“We pulled out of the Paris climate accords. What has happened since then? Our [carbon dioxide] production is down in a growing economy,” Mulvaney said. “Our economy is getting bigger. Manufacturers are producing more. Factories are opening more. People are driving more and more. Yet our pollutants are going down.

“Compare that to some of our European and Asian countries who are signatories to the accords who have slower economies, and [carbon dioxide] is going up. Actions speak louder than words,” he said.

The Affordable Clean Energy rule will also cut mercury emissions, as well as precursors for pollutants, such as fine particulate matter and ground-level ozone, according to the EPA.

The EPA projects that by 2030, the new Affordable Clean Energy rule will reduce carbon emissions equivalent to taking 2.1 million cars off the road. The agency also estimates it will lead to net economic benefits of between $120 million and $730 million, including compliance costs, domestic climate benefits, and health benefits.

The Affordable Clean Energy rule is set to be implemented in three stages. The first is that EPA determines what is the “best system of emission reduction,” or a formula from existing coal-fired power plants.

That’s different from the Clean Power Plan, which mandated renewable energy requirements and switching away from coal to alternative energy sources.

Under the Affordable Clean Energy rule, states will still have EPA guidelines to develop their standards. Step two is that each state will have three years to submit an emission-reduction plan to the EPA. In the third step, the EPA has a year to approve the plan.

Rep. David McKinley, R-W.Va., the chairman of the Congressional Coal Caucus, said the Obama-era rule was never about a cleaner environment, but rather about regulating the coal industry out of business.

“Whatever some extremists might think, coal is going to be crucial and critical for our grid reliability and resiliency,” McKinley told the audience at the EPA event. “The Clean Power Plan had little or no effect on the environment. It was mainly to devastate our coal industry across America. It would have shut down our coal industry across America.”

McKinley said the Affordable Clean Energy plan ensures a clean environment and “buys us time” to develop other energy sources that are not ready.

However, the new rule amounts to a “dirty power plan,” said Sen. Tom Carper, D-Del., the ranking member of the Senate Environment and Public Works Committee.

“By repealing the Clean Power Plan and replacing it with a perverse version, the Trump administration is putting American lives and our economy at risk, and ensuring that our country will [forgo] the economic opportunities of a clean energy future,” Carper said in a statement.

“The Trump plan is founded upon a warped reinterpretation of the Clean Air Act that allows states to decide whether or not to regulate one of the largest sources of carbon emissions in our country.”

But Nick Loris, deputy director of the Roe Institute for Economic Policy Studies at The Heritage Foundation, disagreed. The new Trump rule, he said, is a “sensible alternative” to the “Obama administration’s alarmist agenda.”

Its legal troubles aside, the [Clean Power Plan] regulations would have imposed significant costs on American families and businesses, all for negligible impact on global temperatures.

Rather than having a centralized agency like the EPA force states to re-engineer their energy landscape, [the Affordable Clean Energy rule] focuses on the regulation at the power-plant level, right-sizing the EPA’s regulatory role.

[The Affordable Clean Agency rule] offers a much-needed course correction on an agency that went rogue in promulgating [the Clean Power Plan].