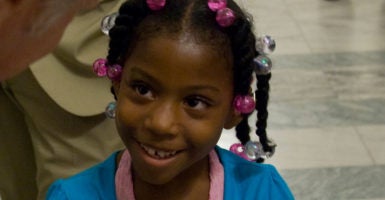 In 2009, then-4-year-old Nia Thomas talked to then-Sen. Joseph Lieberman before the start of a news conference on the introduction of the Scholarships for Opportunity and Results Act to reauthorize the D.C. Opportunity Scholarship Program. (Photo: Douglas Graham/Roll Call/Getty Images)

For 15 years, the D.C. Opportunity Scholarship Program has been a District of Columbia institution.

Yet the program, which provides scholarships to children from low-income families to attend a private school of choice, faces death by a thousand regulatory cuts.

Since Congress enacted it, participation among private schools has fallen from a peak of 68 schools during the 2005-06 school year to just 48 schools today.

Fewer schools participating—a 30% reduction—means fewer choices for families. So, what explains the decline?

Each time the program has been reauthorized, new regulations have been added requiring participating private schools to conform more and more to the public school system.

When the D.C. Opportunity Scholarship Program was originally signed into law and began operation in 2004, participating private schools were bound by a relatively light set of regulations.

They were required to abide by federal civil rights laws; had to have scholarship students participate in independent, congressionally mandated evaluations of the program; and had to provide reports about student academic achievement to parents.

But in 2011, Congress added new requirements that participating private schools submit to site visits by the program administrator, inform prospective students about the school’s accreditation status, mandate that teachers of core subjects have bachelor’s degrees, and require participating students to take some form of nationally norm-referenced test.

Notably, the 2011 reauthorization also required, for the first time, that participating private schools be accredited or be on a path to accreditation.

The reauthorization mandated that the Institute of Education Sciences at the U.S. Department of Education conduct evaluations of the academic achievement outcomes of students attending schools in which more than 85% of the student body uses a voucher to pay tuition.

Notably, the 2017 reauthorization required that each participating school supply a certificate of accreditation to the administering entity upon program entry, demonstrating that the school is fully accredited before being allowed to participate.

Throughout the course of 2018, I interviewed private school principals about their decision to participate, not participate, or withdraw from the program.

Although the majority of the decline in participation is explained by school closures and charter conversions, other schools that exited the program may have done so out of an increasing regulatory burden.

Accreditation was one of the most frequently discussed issues throughout the interviews I conducted with principals and was largely seen as a time-consuming and costly process that outweighed the benefit of program participation.

Another major issue for school principals was the risk and volatility associated with program participation.

In particular, school leaders expressed frustration with the political nature of the congressional appropriations process.

They noted that funding instability makes schools appear risky to banks and donors, and that the scholarship amounts are typically lower than the price of tuition—meaning there’s a cost associated with accepting a D.C. Opportunity Scholarship Program student for most private schools.

Unfortunately, their fears may not be unfounded.

The House Financial Services Committee’s bill includes language reauthorizing the D.C. Opportunity Scholarship Program that would make it more difficult for private schools to participate in the program and serve needy students.

The language would add significant new regulations onto participating private schools, requiring them to certify that they will provide students with “the same services, rights, and protections under the Individuals with Disabilities Education Act [IDEA]” as D.C.  public schools do.

Parents of children with special needs, however, opt into participating private schools because the services provided to their children in the public school system—and the all-too-often litigious process in which they must engage in order to get what they’re entitled to in the public system under federal law—is not meeting their needs.

Layering on this new federal regulation to private schools in the Opportunity Scholarship Program would effectively end private school participation and the program as we know it.

Additional regulations would only exacerbate the issue of declining school participation.

That suggests that at least 22 operational private schools in the District could be participating in the Opportunity Scholarship Program, but aren’t doing so.

The D.C. scholarship program has been transformative for the students who receive its scholarships:

More than 10,700 scholarships have been awarded since the program began in 2004, providing a lifeline for children from low-income families in the nation’s capital. For the program to continue serving these children, and to expand it to more students in the District, there’s a need for substantive changes.

These immediate reforms would put the Opportunity Scholarship Program, the only school choice program overseen by Congress, on stable footing, and would set the stage for the program to meet the needs of low-income families in the District of Columbia for years to come.