Mike Lee’s New Bill Would Enforce ‘No Regulation Without Representation’ 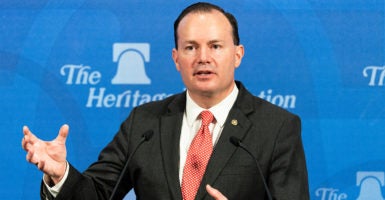 Americans should not have to put up with so many  government regulations imposed by unelected bureaucrats, Sen. Mike Lee, R-Utah, said Tuesday while outlining a legislative remedy at The Heritage Foundation.

Lee said he introduced the Take Care Act as the third part to a conservative legislative program that seeks to reduce the size and impact of administrative agencies, what he called the “headless fourth branch of the federal government.”

Lee told his Heritage audience that regulatory rules written and enforced by unelected administrators violate Article I, Section 7 of the Constitution, which declares that all laws must be passed through both chambers of Congress and be signed into law by the president.

The proposed Take Care Act, Lee said, would solve this problem by allowing the president to use his constitutional power to remove upper-level agency officers who aren’t “faithfully executing the law.”

Currently, Lee said, executive branch officials may be removed only for committing an act of misconduct such as “inefficiency, neglect of duty, or malfeasance in office,” and are protected against being removed for political reasons.

He argued that this change would make the bureaucracy accountable to the people again.

“The way to accomplish that goal, while not easy by any stretch of the imagination, is itself straightforward,” Lee said. “We need only look to the structural design of the Constitution, and the form of the administrative state equivalent. This is so simple. It’s one of the simplest features of our Constitution, and it’s also the most important.”

Lee, author of the related book “Our Lost Declaration: America’s Fight Against Tyranny from King George to the Deep State,” said that because Congress today delegates the majority of its lawmaking to unelected, unaccountable regulatory agencies, this abuse of legislative power is much more concerning than executive tyranny.

“Our constitutional obligation to write laws we have handed over to bureaucrats who are in no way chosen by the people, in no way accountable to the people,” Lee said, adding:

We’ve delegated that which [18th-century French political philosopher] Charles de Montesquieu described as something that cannot, should not, must not be delegated. … The power to make law involves the power to destroy all sorts of things. And so that’s why it was entrusted only to that branch of government most accountable to the people at the most regular intervals.

Lee said that although some have expressed concern that his bill would give the president too much power, political constraints (such as the Senate’s “advise and consent” role in executive nominations) would ensure that agency officials could fulfill their responsibilities without undue interference.

“I’d still rather have the president act as president,” Lee said. “And I’d say that even if we’re talking about some future president, with whom I would likely disagree a lot. Let’s say future President Elizabeth Warren; I would rather have even that president wield the executive power than an unknown technocrat.”

Lee went so far as to say that a more powerful executive is preferable to the so-called “expert” government administrator, and that’s why Congress should pass his legislation.

“The unknown, nameless, faceless bureaucrat, however well educated, well intentioned, hardworking, and highly specialized, would not have to answer to the American people, not ever,” Lee said.