Why a Bigger Social Security Program Would Make Us Worse Off 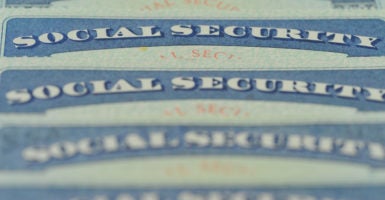 "Americans of all income levels would be better off paying less in Social Security taxes and receiving more targeted benefits in line with need," writes Rachel Greszler. (Photo: marcusamelia/Getty Images)

The truth is unavoidable: Social Security is insolvent. It’s set to run out of money to pay scheduled benefits in about 15 years, barring action from Congress.

Policymakers have only a handful of options to avoid a roughly 25% cut in benefits for everyone. They can raise taxes, cut benefits, or enact a combination of both—and the sooner Congress acts, the smaller the required tax increases or benefit cuts will be.

In a new report, my colleague, Drew Gonshorowski, and I at The Heritage Foundation examine that question. We find that Americans of all income levels would be better off paying less in Social Security taxes and receiving more targeted benefits in line with need.

Alas, that’s not what Congress wants to do.

The bill goes further than just raising taxes enough to avoid benefit cuts. It would raise taxes enough to increase benefits immediately for all current and future Social Security recipients.

Once fully phased in, someone making $50,000 a year would have to pay $1,200 more per year than what they’re paying today. Their total Social Security tax bill would be $7,400—about as much as an entire household spends on food in a year.

What’s most perplexing about the Social Security 2100 Act is that it would increase benefits the most for wealthy Americans.

Under the act, a worker earning an average of $30,000 a year would receive $333 more in Social Security benefits. Millionaires, on the other hand, would receive $12,333 more per year.

That’s hardly in line with the purpose of a social safety net program.

The irony is that while everyone would receive more benefits than they currently do under the Social Security 2100 Act, those benefit increases would be less than if they had just kept their money and saved it on their own.

That’s because, despite what politicians say, Social Security is not a personal savings program. It is a wealth transfer program that moves wealth from younger generations to older ones. It takes workers’ payroll taxes and immediately transfers them to current retirees, making it harder for workers to save money for themselves over time.

As our analysis shows, workers of all income levels would be better off keeping their own money than paying higher taxes and receiving higher Social Security benefits.

That’s at the individual level. But the societal impact is even more profound.

Researchers at the University of Pennsylvania’s Wharton School of Business looked at both the Social Security 2100 Act and a smaller, more targeted Social Security reform—something similar to The Heritage Foundation’s proposal, including raising the retirement age, reducing benefits based on wealth, and lowering cost-of-living adjustments. They found that the economy would be 7.3% larger with a smaller Social Security program.

How is that so? As former Social Security Principal Deputy Commissioner Andrew Biggs explains:

Slower growth compounds over time, bringing down family incomes. By 2043, the Penn Wharton analysis estimates that if the Social Security 2100 Act became law, gross domestic product would be $1.6 trillion lower (in today’s dollars) than if lawmakers provided more targeted benefits and did not raise taxes.

While there is no way to undo Social Security’s past excesses, Congress can curb the program’s growth and focus on its original purpose: protecting seniors from living in poverty.

No one wants to see low-income elderly people’s Social Security checks slashed by 25%, but they also don’t want to forgo more of their paychecks and have fewer opportunities and earnings in the future.

There simply isn’t any economic benefit, moral argument, or social safety net role for imposing higher taxes across the board in order to provide middle- and upper-income earners with more money for golf green fees and gifts for grandchildren.

No one is against those things, but they should come from private savings, not a federal safety net program.

Social Security ought to be realigned with its original mission of keeping seniors out of poverty. If that is achieved, we estimate the Social Security tax rate could decline to about 10% instead of rising to nearly 15%.

That would leave the average American with about $2,400 more in their pocket each year. That’s $2,400 they can use however they want, based on what they know is best for their family.