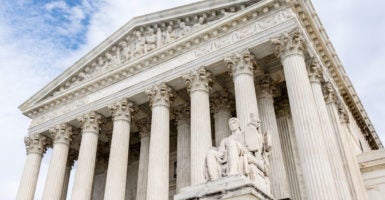 The case of Christian bakers Aaron and Melissa Klein pits the rights of religious dissenters against those of gay patrons in the marketplace. (Photo: OGphoto/Getty Images)

The Supreme Court lifted an order Monday that punished a Christian couple in Oregon who refused to bake a cake for a same-sex wedding, telling a lower court to reconsider the dispute in light of the high court’s decision last year involving another Christian baker in Colorado.

The decision keeps a contentious social dispute over the rights of religious dissenters and LGBT patrons off the high court’s docket in the near term.

“This is a victory for Aaron and Melissa Klein and for religious liberty for all Americans,” said Kelly Shackelford, president of First Liberty Institute, a law firm championing religious freedom that represents the Klein family.

“The Constitution protects speech, popular or not, from condemnation by the government. The message from the court is clear; government hostility toward religious Americans will not be tolerated.”

The Oregon case is in many respects a redux of the 2018 Masterpiece Cakeshop decision, which pertained to Jack Phillips, an evangelical baker in Colorado.

Though the justices found for Phillips because a state panel displayed hostility toward his religious beliefs, the court did not say whether conservative religious believers can cite the First Amendment in refusing to accommodate a same-sex wedding.

Like the Colorado baker, the Kleins say forcing them to create a cake violates their constitutional guarantees of free speech and free exercise of religion.

Monday’s dispute arose in Oregon in 2013 when Aaron and Melissa Klein, who created custom baked goods through their business Sweet Cakes by Melissa, declined to produce a wedding cake for a lesbian couple, Rachel Cryer and Laurel Bowman.

The Kleins are Christians who believe marriage was instituted as a union of one man and one woman.

Cryer and Bowman filed a complaint with a state anti-discrimination panel. In turn, the Kleins argued their actions were protected under the First Amendment’s free speech and free exercise of religion clauses.

The Kleins were ordered to pay out a $135,000 fine and cease discriminating on the basis of sexual orientation. They have since closed their business because of the financial penalty.

A state court in Oregon upheld that decision, finding that cakes do not deserve full First Amendment protection because they incorporate many nonexpressive elements, and whatever expression they convey is not imputed to the creator. The court further found that precedent barred the Kleins’ free exercise claim.

On remand from the justices, the Oregon court will search the case record for evidence of anti-religious animus against the Kleins. The case lingered on the high court’s docket for months, an indication that there were protracted internal debates about how to process the dispute.

The Supreme Court followed a similar course in 2018 with a like controversy in Washington state, where florist Barronelle Stutzman refused a request for floral arrangements at the wedding of a longtime gay patron.

Stutzman’s case was held in abeyance while the high court weighed the Masterpiece Cakeshop dispute. Eventually, the justices returned the matter to a Washington state court with orders to reconsider it in light of Masterpiece.

The Washington state Supreme Court again ruled against Stutzman on June 6, so she will file a second appeal at the U.S. Supreme Court.

As such, the question of First Amendment defenses to public accommodations laws requiring businesses to serve gay patrons will return to the high court in coming months.

Apart from the long-running controversy over religious dissenters and gay couples, the Supreme Court will decide if a federal workplace nondiscrimination law covers LGBT employees.

Those panels said that anti-gay bias is a form of sex stereotyping in which employers punish workers for failing to adhere to gender norms, which Title VII prohibits.