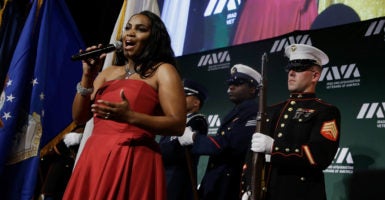 Recording artist Mary Millben will perform the national anthem for President Donald Trump at Tuesday’s rally at the Amway Center in Orlando, Florida. Millben headlined The Heritage Foundation’s Annual Leadership Conference in April and spoke to The Daily Signal about her love of America’s patriotic music and what it’s like to perform for three U.S. presidents. She recently celebrated the release of her debut single “Grace Will Lead Me Home,” written for the new film “The Meanest Man in Texas.” The full interview, along with a lightly edited transcript, is below.

Rob Bluey: You’ve had the opportunity to perform before three presidents, most recently at President Donald Trump’s inauguration, but also for Presidents Barack Obama and George W. Bush. What is that experience like, to sing before the leader of the free world?

Mary Millben: Thanks for having me, it’s been a joy to be here with Heritage and so grateful to Mrs. Kay Coles James for the invitation.

I tell you, it’s pretty surreal, but I will say, a true blessing. I have loved my interfaces within the political arena. And I think every artist, when you have the opportunity to use your platform for good, and it’s certainly in the context of for the country, it’s an honor.

Bluey: Tell us about your life story, how you ended up in government, and then how you moved into the entertainment world.

Millben: In short, because it’s a pretty lengthy one, I’ll say, entertainment and politics are pretty much the same profession. Every four years a new Broadway show comes into town. Right?

But, I tell you, it’s been great because I started in a pretty robust journey in politics. I was an intern at the White House for President Bush and then went to work the latter four years of the Bush administration.

During my time there I was doing a lot of singing in Washington, D.C. I was singing for Christmas tours in the White House and dinners in D.C. And that’s what really introduced me to the entertainment business.

Following my appointment with the Bush administration, I auditioned for a Broadway show that was opening in D.C. at the time. And right when President Obama came in, I left and went into entertainment.

[It] kind of led me to the concert world and moving to New York and all types of things.

But it’s been wonderful because now in my season of performing I’ve been doing a lot of performing back in Washington, D.C., and in the political arena.

That has been a joy because I care about policy, I care about this country, I love America. I know where my freedom comes, as Gary Sinise says, our good friend.

So it’s been a joy to be able to contribute musically in an arena and an environment that I feel so strongly about.

I’ve been fortunate that I’ve been given a platform that works on both sides of the aisle to make a difference for the country.

Bluey: So when you’re doing the Trump inaugural or other events, you don’t shy away from your pro-America feelings.

Bluey: What has it been like to be in entertainment, though, and have some views that might differ from maybe where the majority of people are?

Millben: It’s certainly not a cake walk. I am a proud conservative, I’m not afraid to say that, and certainly have my convictions and values that I hold true.

So I think, again, artists, entertainers have the great opportunity to use their platforms for broad conversations. I heard a recent person say, “You can’t change the world and resemble the world you want to change.”

I know that … this is what God has called me to do and I try in everything that I am presented with to represent him first and certainly represent the convictions and values that I believe in.

I feel that we are in a time where we are losing some of that civility in the context of being able to have conversation that may differ. I encourage it more.

The more I sit down with someone that I don’t agree with perhaps or may share a difference of opinion, the better because that’s a way for us to all find common solutions and common ground to bettering the country.

So I’m not afraid of a little opposition in the entertainment business, but certainly always find ways to work with differing opinions to better the country.

Bluey: That’s a message that she certainly speaks about frequently.

And you’ve had success in entertainment. So I’d like to hear about some of the things you have coming up. A new single coming out and debuting in a film.

Share with our listeners what they can expect to hear from you in the future.

Millben: Thank you. Well, [I’m] very excited. I have been really blessed as a newbie still in the music business to I have worked with some great songwriters and composers. And it’s just been a blessing.

A couple of years ago I recorded a great song called “Grace Will Lead Me Home” with Stephen Dorff, who is a very popular, three-time Grammy nominee, six-time Emmy nominee, and was inducted into the Songwriters Hall of Fame last year.

And we recorded a song a couple of years ago, landed into a film called “The Meanest Man in Texas,” which opened April 19 in Texas. And will be in theaters across the country here May 20.

The film did very well in the film festivals across the globe and certainly here in the states. We’re just very excited about the film and the music.

That has just led to a whole new energy of interfaces musically within film and within the recording music industry and so lots of exciting things. I’m really blessed. Really blessed.

Bluey: Who would you say are some of the biggest role models in your life when it comes to the entertainment world?

Bluey: It can, I guess, be political as well.

Millben: I tell you, I’ve been blessed. … My parents are retired ministers, so I come from a a long journey within the faith community and certainly the ministry. A lot of great mentors come from there.

But musically, when I was a little girl, the faces on my wall were the Diana Rosses, and the Barbra Streisands, and Aretha Franklins, and the Clark Sisters coming from the gospel music world. … Musically, [they] were a lot of my inspirations going into music. You can add Whitney Houston right in there, too.

But I would also say politically, Ronald Reagan was on my wall growing up, and certainly [I’ve had] such admiration for the Bush family because of working for them.

I tell you, I’ve been blessed. I’ve had a tremendous amount of mentors from an array of different professions.

And one that we know well is Mrs. Kay Coles James, who is the president of Heritage.

She’s been a tremendous support to me and to my career as a young professional and an artist and just a blessing to be able to be connected to Heritage in this regard musically, but also in what I believe and my conviction.

Bluey: Thank you for that. Do you have a favorite song that you’ve performed?

Millben: Goodness. You know, I love music. I was trained classically, so I grew up singing the great arias and the classics. But I love just about everything.

Millben: Actually, my favorite music to sing, and I’m not just saying this because I’m here, I love singing America’s patriotic music.

I love those words of “The Star Spangled Banner” and “America the Beautiful” and “God Bless America.” Those songs are timeless, of course, but they speak to who we are as human beings, as citizens, as a community.

Those types of songs that inspiration are very meaningful to me. So while I love to sing—I love gospel. I love country music. I love jazz. I love Broadway theater. I love just a little bit of everything, but I think it’s the songs of our country that I love singing most.

Bluey: I agree with you on that. They certainly do represent all those values that we talk about.

Bluey: Finally, I want to ask you, what advice do you have for young people who may want to make their mark in the entertainment world? Based on your own experience, what would you tell them?

So, to any young person coming into the business, first: Do it. There’s nothing more rewarding than getting up every morning and saying, “I’m doing what God is calling me to do.”

But more importantly, stay true to who you are. Your voice is unique and there’s only one of you.

You’ll make an impact beyond what you could ever imagine if you stay true to that as an artist and as a voice in the business.

Bluey: Mary, great advice. Thanks so much for being here.

Millben: Thanks for having me. It was great to be here.