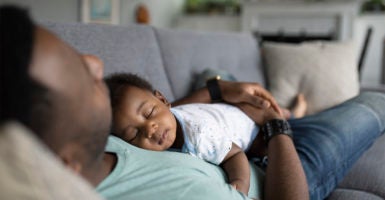 "When it’s all said and done, these kids, bigger than I am, will start crying," says Dr. Curtis Longs, a staff psychiatrist of the Juvenile Assessment Center of Wayne County. "It’s devastating not to be in our kids lives." (Photo: Hero Images/Getty Images)

DETROIT–With Father’s Day just upon us, a recent public conversation about the stigma of mental health in the black community emphasized the significant impact absent fathers have on a child’s emotional wellness.

“It’s time for us to have a conversation that’s been delayed and long overdue,” said Josh Landon, a Fox 2 News anchor, as moderator of the June 1 event in Corktown, a historic district of Detroit. “I want to have a kitchen table conversation on the unaddressed mental health awareness in our community. Let’s remove the social stigma and share positive reflections.”

The panel was hosted by the Detroit Police Athletic League in partnership with the National Association of Black Journalists as part of the group’s Black Male Media Project, an effort to help create a more positive narrative for black males in media. Each of the panelists had a background in children and mental health.

Dr. Curtis Longs, a panelist who is a staff psychiatrist at the Juvenile Assessment Center of Wayne County, said almost all of the young black males he’s encountered in the juvenile detention facility had never met or barely know their father.

“If there is an African American male child, a boy, in Wayne County juvenile center, no matter what the charge is, … of 100 males, none of them have ever met their dad,” Longs said.

When The Daily Signal asked Longs about the prominence of fatherless black families, he said:

The answer is it’s devastating. If I can just have a list of kids that I’ve seen and look at their record and all of this stuff, and you see this kid, they know you’re going to talk about their dad. When it’s all said and done, these kids, bigger than I am, will start crying. It’s devastating not to be in our kids lives.

Panelist Karlin J. Tichenor, who holds a doctorate in marriage and family therapy and has worked in schools, elaborated on the emotional consequences for fatherless children.

“The impact of fatherlessness on males and females…is around emotional neglect within the family dysfunction,” said Tichenor, adding:

There’s a baseline standard that we are all supposed to experience in our home to make us whole, to make us transcend to the lives we’re supposed to live. If we have any absence of those emotional inputs, our ability to transcend is lessened significantly, in particular, when instead of those positive examples, we’re exposed to negative examples that can teach us things that we do not need to know, even though that are helpful in a community in order to survive, and not necessarily helpful for us to thrive emotionally with balance.

The panelists also talked about the long-term effects of untreated mental illness in the black community. Longs said toxic masculinity is an issue because black men are encouraged to hide their emotions.

“It’s killing us, whether by suicide or homicide, and if not, in other forms like obesity, cardiac issues, diabetes. We ignore our health care and the long-term effects kill us,” he said.

According to the National Alliance on Mental Health, mental health is rarely discussed in the black community.

The Health and Human Services Office of Minority Health notes that African Americans are 20% more likely to experience serious mental health problems than the general population, including major depression, attention deficit hyperactivity disorder, suicide, and post-traumatic stress disorder, “because African Americans are more likely to be victims of violent crime.”

“There’s an overwhelming impact of fatherlessness on the emotional level and other things that could be considered,” Tichenor added. “I think it’s important to know that so as we think about ‘the absence of fathers,’ we find other helpful models that can counteract it to some level.”

#Inspireblackmen circulated on Twitter as part of the campaign to change the perception of black men in news and society. The initiative launched nationwide with panels, workshops, and events.