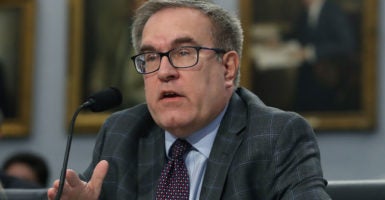 EPA Administrator Andrew Wheeler, pictured at a hearing in April, issued a memorandum directing the agency to “ensure that its regulatory decisions are rooted in sound, transparent and consistent approaches to evaluating benefits and costs.” (Photo: Mark Wilson/Getty Images)

The agency hasn’t always thought so.

In 2012, under President Barack Obama, the EPA finalized a rule to reduce emissions of mercury and other hazardous air pollutants from coal- and oil-fired power plants.

In doing so, the agency decided that it didn’t need to consider the rule’s costs, estimated at $9.6 billion per year—roughly 2,000 times more than its annual benefits of only $4 million to $6 million.

Fortunately, the U.S. Supreme Court directed the agency to take costs into consideration based on specific Clean Air Act language applicable to that rule. If the EPA had its way though, costs wouldn’t have been considered.

That cavalier attitude is evident in other major air regulations, where the EPA didn’t bother to quantify whether there would be any benefits for reducing emissions of the regulated pollutant.

Now, however, there’s reason to hope that some common sense might finally be coming to the EPA.

In May, EPA Administrator Andrew Wheeler issued a memorandum directing the agency to “ensure that its regulatory decisions are rooted in sound, transparent and consistent approaches to evaluating benefits and costs.”

The full scope of what this process will entail isn’t clear. However, it appears that various offices within the EPA will be proposing rules to codify important principles of cost-benefit analysis into the agency’s work.

The memo explains that “the EPA should evaluate and consider both benefits and costs in decision-making.” The fact that such an obvious point has to be made is sadly instructive.

This entire effort shouldn’t be, and doesn’t appear to be, a scheme to reduce regulations per se. But the need for a reasonable, objective, and predictable way to make regulatory decisions is quite evident.

Regulators shouldn’t be allowed to work backward, deciding what policy they want and then gaming (or ignoring) cost-benefit analysis to reach their preferred policy outcomes.

By codifying basic regulatory principles through the rule-making process, the EPA will have a more difficult time going back to the “anything goes” mentality that exists now.

There must be a reasonable and transparent process in how the EPA comes up with its regulations. Make no mistake, these EPA regulations have a major impact on the lives of all Americans.

In addition to environmental objectives, these regulations impact everything from energy costs, infrastructure development, and transportation, to whether a farm includes some dry land that is actually a regulated water under the Clean Water Act.

In moving forward with this process, the EPA should codify basic principles of cost-benefit analysis that have been well-established over the years through various means, including executive orders and Office of Management and Budget documents.

For example, the agency should carefully evaluate to what extent existing regulations or laws contribute to the problem that the agency wants to address.

The EPA should also evaluate alternatives to regulation and choose an alternative that achieves the regulatory objective while posing the least burden on society.

The EPA should identify where regulations are outdated, duplicative, and unnecessary. Further, unless expressly prohibited in statute, the EPA should assume that cost-benefit analysis is required across the board.

As with the EPA, Congress delegates far too much power to other agencies and is arguably unlawfully delegating its lawmaking power. This is certainly a critical problem that needs to be addressed.

But to the extent agencies are able to exercise this enormous and largely unchecked power, there should be some reasonable rules of the game so that their decision-making is based on sound economic principles.

This in no way should suggest that cost-benefit analysis is a panacea for sound policymaking, but applying reasonable principles is far better than having none at all.

To its credit, the EPA is taking on this important endeavor to help ensure the agency properly and consistently considers costs and benefits, now and in the future. Other agencies should follow suit.