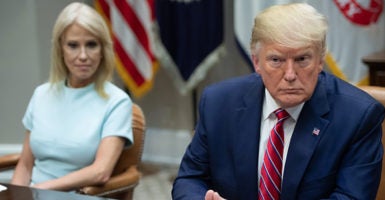 President Donald Trump sits alongside Kellyanne Conway, counselor to the president, in a meeting Wednesday at the White House. The administration rebuffed calls Thursday for her to be fired. (Photo by Saul Loeb/AFP/Getty Images)

The Trump administration came to the defense of White House counselor Kellyanne Conway, sharply rejecting a call from a federal watchdog that she should be fired for criticizing political opponents during TV interviews at the White House.

The Office of Special Counsel issued a report asserting that Conway violated the Hatch Act, a 1939 law that prevents federal employees from engaging in political activities on federal property.

The Office of Special Counsel previously found two of President Barack Obama’s Cabinet secretaries had violated the Hatch Act in 2012 and 2016, but neither was punished.

The letter to Trump called Conway a “repeat offender” for talking about Democratic presidential candidates in TV interviews while on White House grounds. The letter called for the president “to remove Ms. Conway from her federal platform immediately.”

“Ms. Conway’s violations, if left unpunished, would send a message to all federal employees that they need not abide by the Hatch Act’s restrictions,” the letter states. “Her actions thus erode the principal foundation of our democratic system—the rule of law.”

Conway, the first woman to manage a successful presidential campaign, told reporters Thursday, “I have no reaction.”

The White House is standing behind Conway. White House counsel Pat Cipollone wrote a response to special counsel Henry Kerner, claiming the report was based on “numerous grave, legal, and procedural errors.”

“First, even assuming that the Hatch Act applies to the most senior advisers to the President in the White House, OSC has violated its statutory obligation to provide Ms. Conway a reasonable opportunity to respond, violated Ms. Conway’s due process rights, and abused its discretion by issuing a report tainted by inappropriate external influences,” the White House counsel’s letter says, adding:

In fact, OSC had no legal authority to promulgate guidance on social media use that it treats effectively as binding rules in order to enforce its overbroad interpretation of the act.

Third, contrary to your letter, Ms. Conway’s Twitter account and her social media appearances do not violate even the standards used by the OSC itself. Worst of all, OSC’s call to the President ‘to remove Ms. Conway from her federal platform immediately’ is as outrageous as it is unprecedented.

Rep. Elijah Cummings, D-Md., chairman of the House Oversight and Reform Committee, who is leading multiple congressional probes of the Trump administration, called for Conway’s immediate ouster based on the Office of Special Counsel findings.

“Complying with the law is not optional. President Trump should terminate Ms. Conway’s employment immediately in light of these dozens of violations of federal law,” Cummings said in a statement.

“Allowing Ms. Conway to continue her position of trust at the White House would demonstrate that the president is not interested in following the law—or requiring his closest aides to do so,” he said.

During the Obama administration, the Office of Special Counsel found then-Secretary of Health and Human Services Kathleen Sebelius in violation of the Hatch Act for endorsing a North Carolina Democratic candidate for office during a 2012 speech in her HHS capacity to the Human Rights Campaign, an LGBT group.

Obama’s secretary of Housing and Urban Development, Julian Castro, endorsed Hillary Clinton for president from his HUD office during a 2016 interview.

The Office of Special Counsel for a time also investigated Obama’s first labor secretary, Hilda Solis, but dropped the matter when she resigned from the Cabinet to run for office in California.

Before that, the Office of Special Counsel determined that under President George W. Bush, the White House Office of Political Affairs violated the Hatch Act for its promotion of Republican congressional campaigns.

The Office of Special Counsel is an existing federal agency that investigates whether federal employees violated rules on politics and other matters. It’s not to be confused with the office of former special counsel Robert Mueller.

The Office of Special Counsel’s report found in March 2018 that Conway violated the law during two TV interviews advocating for and against candidates in a special election in 2017 for a Senate seat from Alabama. That report did not recommend her firing.

The White House counsel’s response to the letter was “devastating,” said Hans von Spakovsky, a senior legal fellow with The Heritage Foundation.

“It is also clear that OSC didn’t follow its own procedural rules designed to provide due process protections to federal employees in rushing out a report, because OSC admitted it was ‘personally’ offended by Conway’s criticisms and supposed ‘disrespect’ towards OSC,” von Spakovsky said.

“This OSC report seems to have been generated due to Kerner’s personal animus towards Conway,” he said.