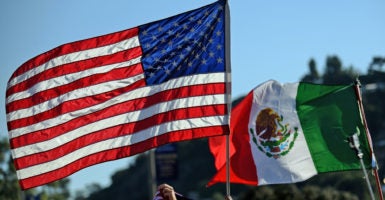 Mexico has agreed to hold an increased number of Central American migrants in Mexico while they await processing of their U.S. asylum claims. (Photo: Jonathan Moore /Stringer/Getty Images)

After a week of negotiations, the U.S. and Mexico came to a landmark deal on addressing the Central American migration crisis. If implemented correctly, it could usher in a new era of joint action in addressing illegal immigration.

With this new agreement, the U.S. and Mexico now have an operational framework for bilateral and individual measures on reducing migration flows.

Mexico has committed to an expansion of the Migration Protection Protocols, otherwise known as the “Remain in Mexico” policy.

This means that Mexico has agreed to hold an increased number of Central American migrants in Mexico while they await processing of their U.S. asylum claims.

Previously, Mexico was accepting an average of 250 individuals per day; this number is expected to rise to 1,000 people. In addition, Mexico is reportedly open to accepting assistance from the U.S., which would expedite its capabilities.

The Mexican government has also agreed to additional enforcement mechanisms on both its border with the U.S. and more notably on its shared border with Guatemala.

Mexico has committed to a 6,000 Mexican National Guard personnel deployment and sharp uptick in arrests. This component of the deal heralds a decisive shift in Mexico’s approach to its southern border.

Reportedly, Mexican officials have said that this will be “the first time in recent history that Mexico has decided to take operational control of its southern border as a priority.”

Within the agreement, Mexico has vowed to take broader measures individually and alongside the U.S. at addressing the criminal networks involved in human trafficking and smuggling.

This component of the agreement creates a platform for deepened cooperation amongst U.S. intelligence officials and law enforcement and their Mexican counterparts.

The joint declaration and subsequent reports from U.S. and Mexican officials indicate an attempt at creating a regional migration management system with key transit countries in Latin America.

This proposal aims at forming a regional arrangement in which asylum-seekers would apply for sanctuary in the first country they reach.

For both the U.S. and Mexico, there is much to be celebrated.

The challenges posed by the surge of Central American migrants transiting to Mexico en route to the U.S. has become a key issue for Mexican President Lopez Obrador.

The drastic uptick has resulted in a significant financial and resource burden on the Mexican government.

Additionally, the smuggling and trafficking of these migrants is facilitated by organized crime, fueling dangerous organizations within Mexico and the region.

Adopting the proposals in this new framework focused on enforcement measures is a decisive shift from Mexico’s traditional perspective on Central American migration.

The parameters mandated by the agreement compel the government of Mexico to elevate illegal Central American migration as a national security priority.

Should the enforcement measures reduce the burden on both countries as expected, this could lead to a permanent and decisive shift in Mexico’s future policies.

This deal is also the first time there are measurable outcomes the U.S. and Mexico must achieve.

Both countries have also agreed to meet and revisit the agreement in 90 days should the migrant numbers not decline.

Moving forward, the U.S. ought to be mindful that alongside enforcement actions, deepening cooperation with the Northern Triangle’s El Salvador, Guatemala, and Honduras is the backbone to addressing the border and regional crisis.

Increased enforcement and border controls are important but equal importance must be given to the long-term project of building government capacity, supporting economic development, and rooting out corruption.

Addressing these factors that drive outmigration must remain key pillars of the U.S.’ policy toward the Northern Triangle countries of El Salvador, Honduras, and Guatemala.

Should the U.S. and Mexico need to revisit the agreement, the U.S. must seek other negotiating tools besides the threat of tariffs. With Mexico policy, economic penalties must not be linked with migration or other security related matters.

Mexico is the U.S.’ largest trading partner and our integrated economies have made it so that the cost of tariffs on Mexico would be immediately felt by American consumers and businesses. Bilateral engagement occurs on a broad range of issues and there will be diminishing returns to economic coercion.

The bottom line is that the agreement is a positive step forward in curtailing illegal immigration from Central America and relieving the humanitarian crisis on the U.S.’ southern border.

It is also an indicator of the health and durability of the U.S.-Mexico relationship.

Both countries must remain committed to their end of the deal and finding long-term solutions to the destabilization in the Northern Triangle.