A Hub of Political Correctness Gets Hit With a Big Judgment 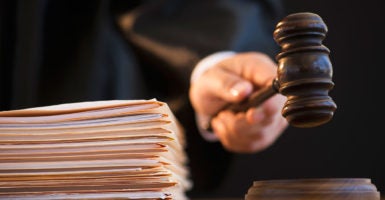 In what is hard to characterize as anything other than poetic justice, Oberlin College and its former vice president and dean of students, Meredith Raimondo, has been hit by an Ohio jury with a multimillion-dollar judgment for libel and intentional infliction of emotional distress against a local family business, Gibson’s Bakery and Candy, which led to a boycott of the bakery over false charges of racism.

What began as a simple shoplifting incident took on a life of its own because of the bakery’s proximity to one of the country’s preeminent institutions of political correctness and progressive thought.

It demonstrates the dangers of jumping to conclusions before the facts are in and the damage done by false charges of racism.

Gibson’s Bakery is a century-old business owned and operated by three generations of the Gibson family.

On Nov. 9, 2016, the day after President Donald Trump’s electoral victory, a black Oberlin student shoplifted two bottles of wine from Gibson’s after he first tried to buy them with a fake ID. He was chased out of the store by the Gibson grandson.

This was the 41st shoplifting incident in five years (40 adults had been arrested previously, including six African Americans).

When the grandson tried to take a picture of the shoplifting student with his phone, he was knocked down and assaulted by the student and two of the student’s friends.

When police arrived on scene, “they [found] Gibson on his back, with [the three undergraduates] punching and kicking him. All three were charged, [the thief] with robbery and his friends with assault.”

Ordinarily, stealing from a private establishment would not merit a national news story or a libel lawsuit, but because the Gibson family is white, and the student black, Oberlin’s ceaselessly “woke” campus erupted with cries that the bakery was engaged in racial profiling of the student and was a “racist” establishment.

We know this is not true because the shoplifting student and his pals eventually pleaded guilty to misdemeanor charges, including attempted theft, aggravated trespassing, and underage purchase of alcohol.

As part of their plea bargains, they admitted committing the crimes and that the actions of the baker had not been racially motivated, i.e., no discrimination had occurred.

But the students and administrators at Oberlin College weren’t interested in the facts. Instead, they immediately acted against Gibson’s.

For example, a flyer was distributed making the false claim that the bakery was a “RACIST establishment with a LONG ACCOUNT of RACIAL PROFILING and DISCRIMINATION” and urging an economic boycott.

The president of Oberlin, along with its vice president and dean of students, sent out an email trying to excuse the students’ behavior by blaming it on the outcome of the presidential election.

They were “deeply troubled because we have heard from students that there is more to the story than what has been generally reported.”

Oberlin ignored the findings of the police investigation that found no evidence of racism.

Instead, Oberlin suspended its long-time business relationship with Gibson’s.

Oberlin’s faculty and administration helped students copy and distribute flyers against the bakery, orchestrated and attended protests against the bakers, and actually gave students academic credit for skipping class and participating in the boycott campaign.

An Oberlin trustee paid the legal retainer for a criminal defense attorney for the shoplifting student, and the university provided the student with a limo to transport him to meet the lawyer.

In a private meeting with the Gibsons, the college demanded that the bakery institute a policy of not filing criminal charges against first-time student shoplifters or call the police.

According to the complaint, a Facebook rant was posted by Oberlin’s Department of Africana Studies claiming that the bakery had been “bad for decades, their dislike of Black people is palpable. Their food is rotten and they profile Black students. NO MORE!”

The Washington Post writes that court documents also “revealed how Raimondo and another administrator shared a sense of outrage after a professor spoke against the [school’s] boycott. ‘[Expletive] him … I’d say unleash the students if I wasn’t convinced this needs to be put behind us.”

Expletive-laced comments from the vice president and dean of students at what U.S. News and World Report ranks as the country’s 30th-best liberal arts school.

All of these actions “‘devastated’ the bakery’s revenue, which forced staffing cuts.” At least six members of the Gibson family were forced to work without pay for months, just to keep the business afloat.

Social justice fervor is nothing new on Oberlin’s campus. In the past five years, students have protested against the cultural inauthenticity of dining hall cuisine, requested trigger warnings for storied works of Western civilization, and submitted a 14-page letter to the school’s board and president with 50 nonnegotiable demands that are the essence of political correctness.

That letter claimed that Oberlin “functions on the premises of imperialism, white supremacy, capitalism, ableism, and a cissexist heteropatriarchy.” And it demanded that the college offer “guaranteed tenure” to an African American professor who claims that the U.S. and Israel planned the 9/11 attacks.

Student complaints about the cultural appropriation of food centered around using incorrect ingredients, such as substitutions for a traditional Vietnamese bánh mì of ciabatta bread, pulled pork, and coleslaw instead of a crispy baguette with grilled pork, pate, pickled vegetables, and fresh herbs.

Even today, the facts apparently don’t matter. In late April, The Oberlin Review wrote that “a black student attempted to make a purchase at Gibson’s Bakery and was accused of shoplifting. The student ran outside the store … and [the son of the owner and the student] got into a physical altercation.”

That phrasing makes the shoplifting seem like an innocuous misunderstanding between a student and rash shopkeeper, rather than a century-old, family-owned bakery being looted in an undergraduate’s attempt to subvert state drinking laws.

And, according to the lawsuit, guides giving campus tours sponsored by Oberlin have continued to tell prospective students to boycott the bakers because it is a “racist establishment” that “assaults students.”

Just as the student body still views the case as a sign of racism, presumably in an effort to divert attention away from their fellow undergraduates’ culpability, so too the school refuses to take responsibility, even after the recent verdict.

In an email to the school’s alumni association, Oberlin claimed it was not responsible for the actions of its students, denying the reality of the college’s participation in, and instigation of, the unfair actions taken against the bakery.

The jury awarded $11 million in compensatory damages and $33 million in punitive damages. The college certainly has the ability to pay the judgment. Oberlin’s endowment is just under $890 million, and tuition is $52,762 per year as of 2018.

This case shows how much damage false claims of racism can cause. And it shows just how infected school administrators and many students are with the absurd victimization culture that predominates in academic culture, and how ridiculous claims of “imperialism, white supremacy, capitalism, ableism, and a cissexist heteropatriarchy” are poisoning their minds.