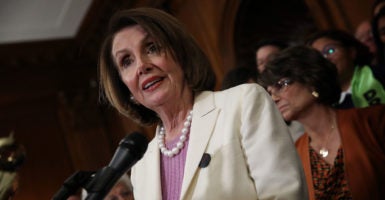 House Democrats asked the D.C. Court of Appeals on Monday to review a judge’s decision rejecting their request to block Defense Department funding for wall construction on the U.S.-Mexico border.

“The House respectfully disagrees with the Court’s standing decision, but the parties are in agreement that there is no need for any further proceedings or briefing in this case and the Court should immediately dismiss the amended complaint for lack of jurisdiction and enter final judgment so that the House may promptly appeal that order,” read a court document filed Monday, according to The Hill.

The appeal comes exactly a week after Democrats were handed a major courtroom defeat in their attempt to block funding for President Donald Trump’s border wall.

U.S. District Judge Trevor McFadden ruled on June 3 that the House of Representatives, which is currently controlled by the Democratic Party, does not have the authority to stop the Trump administration from reallocating funds from the Pentagon for wall construction on the U.S. southern border. McFadden, a Trump appointee, framed the issue as a political fight between two branches of government.

“While the Constitution bestows upon members of the House many powers, it does not grant them standing to hale the executive branch into court claiming a dilution of Congress’s legislative authority,” the judge’s decision reads.

McFadden’s decision was not particularly surprising. The Trump-appointed judge had expressed skepticism about the legitimacy of the lawsuit during a three-hour court hearing in late May. He also appeared cautious about the judiciary wading into a battle between the legislative and executive branches.

Democrats are continuing in their attempt to prevent the Trump administration from using the Department of Defense as a source of funding for barrier construction between the U.S. and Mexico. House general counsel Douglas Letter, who is leading Democrats’ courtroom efforts, said in a court filing that he is appealing McFadden’s ruling.

The fight began in April when Democratic leaders in the House voted to sue over Trump’s border emergency declaration, an action that allowed him to tap billion more for border funding.

“The President’s sham emergency declaration and unlawful transfers of funds have undermined our democracy, contravening the vote of the bipartisan Congress, the will of the American people and the letter of the Constitution,” House Speaker Nancy Pelosi said in a statement following the vote.