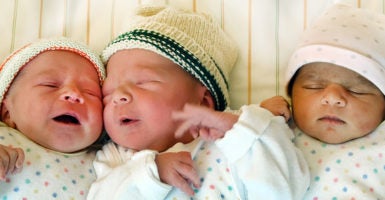 In the Clinic for Obstetrics in the St. Elisabeth and St. Barbara Hospital in Europe, three babies, just a few hours old, lie side by side. (Photo: picture alliance/Getty Images)

Business owners banded together to “stand up for reproductive health care” by posting the ad in Monday’s print edition titled “Don’t Ban Equality,” which says abortion bans are “bad for business.”

Signers included Dorsey as well as business owners of Yelp, H&M, Slack, Postmates, Bloomberg L.P., and Warby Parker. Dorsey signed on behalf of Square Inc., but not on behalf of Twitter. He did not immediately respond to a request for comment from The Daily Caller News Foundation as to why this was the case.

The ad itself lists around 80 of the 180 business leaders who signed onto the letter.

“Equality in the workplace is one of the most important business issues of our time,” the ad reads. “When everyone is empowered to succeed, our companies, our communities, and our economy are better for it.”

“Restricting access to comprehensive reproductive care, including abortion, threatens the health, independence and economic stability of our employees and customers,” the ad continued. “Simply put, it goes against our values, and is bad for business.”

“We, the undersigned, employ more than 108,000 workers and stand against policies that hinder people’s health, independence, and ability to fully succeed in the workplace.”

The ad also said the abortion bans put the economy, families, communities, and businesses at risk and said signers are part of the “Don’t Ban Equality Coalition.”

Access to reproductive care means everyone succeeds including; companies, communities, and the economy. Along with 180 companies, we’ve signed today’s historic @nytimes statement affirming the importance of reproductive health to equality in the workplace. #DontBanEquality pic.twitter.com/Ye4y2fg1Ec

“We are grateful and inspired to have so many business leaders standing with us proudly and publicly to oppose these dangerous, unprecedented attacks—raising the alarm about the chilling effect on their employees and the communities where they do business,” said Planned Parenthood President and CEO Leana Wen.

“NARAL applauds the business leaders signing the #DontBanEquality letter for taking a stand on behalf of their employees, customers, and communities, and affirming the mainstream view that women deserve to be able to make private, personal medical decisions without politicians interfering,” added Ilyse Hogue, president of NARAL Pro-Choice America.

Anthony D. Romero, executive director of the ACLU, said the organization is “proud to stand with these business leaders who are saying loudly and clearly—access to reproductive health care, including abortion, is essential for their employees’ equality in the workplace and their lives.”

“Their statement today shows that the business community won’t sit on the sidelines while politicians continue to try to take away our reproductive rights.”

The business owners referenced the restrictive abortion legislation enacted in Missouri, Georgia, Mississippi, Kentucky, Alabama, and Ohio in the past year.

Georgia and Alabama passed restrictive abortion legislation in 2019. Republican Georgia Gov. Brian Kemp signed a “fetal heartbeat bill” in May set to take effect Jan. 1, 2020, banning most abortions in Georgia after a fetal heartbeat is detected.

The bill makes exceptions in cases of rape and incest if a police report is filed, and when the mother’s health is at risk.

Republican Alabama Gov. Kay Ivey signed H.B. 314 into law May 15. The Alabama law, which is set to take effect within six months of its signing, is the most restrictive abortion law in the United States and is a near-total ban on abortions.

The law makes no exceptions for cases of rape or incest but would make an exception if the mother’s health was in serious danger.

A growing number of Hollywood studios said they will consider no longer conducting their filming business in Georgia should the heartbeat law take effect in 2020, including Disney and Netflix.

The film industry adds about $9.5 billion to Georgia’s economy, but a variety of Hollywood studios said the heartbeat law violates Roe v. Wade and that they are considering taking their filming elsewhere.

The New York Times did not respond to a request for comment from The Daily Caller News Foundation in time for publication.