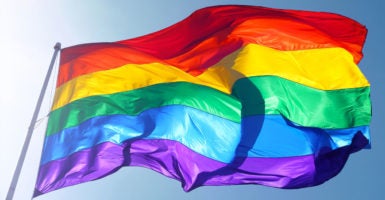 Several ambassadors and diplomats have decided to step around the State Department’s directive not to display rainbow flags on flagpoles during Pride Month. (Photo: nktwentythree/Getty Images)

Several U.S. embassies have reportedly disregarded the State Department’s directive not to display rainbow flags on flagpoles during Pride Month.

Several ambassadors and diplomats have decided to step around the instructions, The Washington Post reported Saturday.

“This is a category one insurrection,” one diplomat who wished to remain anonymous told the Post, responding to the wave of disobedience to the State Department’s rule.

The U.S. embassies in Seoul, South Korea, and Chennai, India, have prominently displayed rainbow flags on the sides of their buildings for Pride Month, according to the report.

The embassy in New Delhi also bypassed the State Department’s instruction by decorating its building with rainbow lights for the monthlong celebration.

The United States Embassy in New Delhi is lit up in #Pride  colors to celebrate #PrideMonth. #LGBTPrideMonth pic.twitter.com/v6gxzAps8a

The chief diplomat at the U.S. Embassy in Santiago, Chile, raised the rainbow flag to celebrate the International Day Against Homophobia, Transphobia and Biphobia on May 17, seen in a video posted on the embassy’s website.

The embassy in Vienna flew a rainbow flag below the American flag on a pole hanging from the side of the embassy’s outer wall, as shown on its website.

Several U.S. diplomats in Jerusalem tweeted photos of themselves at local pride events, including a March for Pride and Tolerance, the Post reported.

The U.S. ambassador to Nepal, Randy Berry, tweeted a picture of himself surrounded by embassy employees holding up rainbow letters that read “PRIDE.”

Today, along with the U.S. Mission in Nepal community, I join people around the world in celebrating Lesbian, Gay, Bisexual, Transgender, & Intersex #PrideMonth, and reaffirm the U.S. commitment to defending human rights for all. #Pride2019 pic.twitter.com/5awKWtcP80

Under the Obama administration, open permission was given to fly rainbow flags for pride celebrations at U.S. Embassy buildings as long as the rainbow flags were smaller and hung lower than the American flag, according to the Post.

President Donald Trump’s State Department has denied requests to fly rainbow flags on embassy flagpoles during June, though displaying the flag on walls of the embassy or in other ways is permissible, according to NBC News.