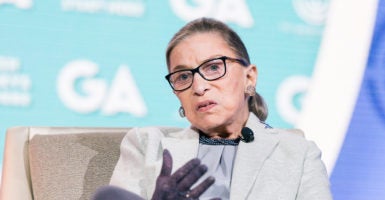 Justice Ruth Bader Ginsburg suggested Friday that the Supreme Court is deeply divided over its most-watched cases, hinting that a series of 5-4 decisions are likely as the court approaches the end of its current term.

Ginsburg said to the 2nd Circuit Judicial Conference the court was unlikely to achieve consensus on several high-profile matters.

“Of the 43 argued cases resolved so far, only 11, or just over 25%, were decided by a vote of 5-to-4 or 5-to-3,” Ginsburg said. “Given the number of most watched cases still unannounced, I cannot predict that the relatively low sharp divisions ratio will hold.”

One case likely to produce such a split is the dispute over the Trump administration’s bid to add a citizenship question to the 2020 census form.

A coalition of civil rights groups and Democratic state governments sued to stop the question’s inclusion, saying it will depress minority participation in the census.

The administration says it needs granular citizenship data to improve enforcement of the Voting Rights Act, but the plaintiffs believe they have uncovered evidence of the government’s true partisan motive.

The census serves as the basis for apportioning seats in Congress among the states.

Ginsburg discussed the census dispute in connection with the 2018 travel ban decision, in which a 5-4 court said President Donald Trump’s entry sanctions were entitled to deference.

“Speculators about the outcome note that last year, in Trump v. Hawaii, the court upheld the so-called ‘travel ban,’ in an opinion granting great deference to the executive,” Ginsburg said. “Respondents in the census case have argued that a ruling in Secretary [Wilbur] Ross’ favor would stretch deference beyond the breaking point.”

Another closely followed case presents a direct challenge to a doctrine of agency law that requires courts to defer to an agency’s interpretation of its own regulation. In recent years, many conservatives have harshly criticized that doctrine, called Auer deference, arguing it places too much power in the hands of unaccountable federal agencies.

Late Justice Antonin Scalia wrote the 1997 Auer decision for a unanimous court. Ginsburg, perhaps alluding to internal divisions, said that overturning Auer would be contrary to “stare decisis,” the idea that judges should adhere to past decisions.

“What role, if any, will stare decisis play in the court’s decision? We shall soon know,” the justice said.

Elsewhere in her remarks, Ginsburg credited Justice Brett Kavanaugh for hiring an all-female staff of law clerks for the first time in the court’s history. Though women now constitute a majority of Supreme Court clerks, Ginsburg lamented that female attorneys made up a small percentage of the advocates who argue before the court.

“Justice Kavanaugh made history by bringing on board an all-female law clerk crew,” Ginsburg said. “Thanks to his selections, the court has this term, for the first time ever, more women than men serving as law clerks.”

“Women did not fare nearly as well as advocates,” she added. “Only about 21% of the attorneys presenting oral argument this term were female.”

The Supreme Court is due to release more opinions Monday.