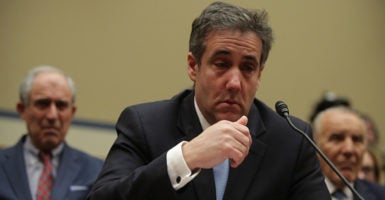 A top House Democrat issued a warning to Michael Cohen, the former personal lawyer for President Donald Trump, early in a committee hearing.

“I’ve made it abundantly clear to Mr. Cohen if he comes here today and he does not tell the truth, I will be the first to refer those untruthful statements to the DOJ,” said House Oversight and Reform Chairman Elijah Cummings, D-Md., referring to the Department of Justice.

That was Feb. 27, when Cohen—days before reporting to federal prison—told Cummings and the Oversight and Reform Committee at least seven things that were inaccurate, according to House Republicans.

Davis, a media-savvy friend and former lawyer for Bill and Hillary Clinton, used the committee “for an orchestrated partisan attack on the president” in a “made-for-cable news hearing,” Jordan and Meadows write.

Among the alleged lies is that Cohen never sought a pardon from Trump, which special counsel Robert Mueller’s report—among other public documents—seems to contradict.

Cohen testified before the House oversight committee that he didn’t seek a White House job, contrary to documents from the U.S. Southern District of New York, where the lawyer pleaded guilty to bank fraud, among other crimes.

Despite that guilty plea, Cohen told the oversight panel that he “never defrauded any bank.”

The Jordan-Meadows letter acknowledges a May 22 letter from Cummings to Jordan, but asserts that the chairman addressed only Cohen’s pardon claim and missed others.

“You declined to follow up on your promise to hold Cohen accountable for his lies to the committee,” the two Republicans’ letter to Cummings says, adding:

Their letter says that Cummings said he would defer looking at potential lies until he reviewed Cohen’s testimony to the other House committee, but never requested access to its transcripts.

In a matter of less gravity, Cohen also denied setting up a Twitter account, @WomenForCohen, contradicting an owner of an information technology firm, Jordan and Meadows write.

Jordan and Meadows say that Cohen couldn’t provide evidence that another lawyer for the president, Jay Sekulow, helped Cohen draft a false statement to the House intelligence committee in 2017.

Their letter notes that information from the intelligence committee’s March 6 interview with Cohen indicates that Cohen engaged in strategy sessions with Democrats on the oversight committee before his testimony.

“Instead of choosing to hold a bipartisan interview with Cohen, you chose to meet alone with him to discuss how Republicans could questions Cohen’s credibility,” the Jordan-Meadows letter says.

In his Feb. 27 appearance, Cohen told the oversight committee: “I have never asked for, nor would I accept, a pardon from President Trump.”

The Mueller report, released to the public April 18, says that Cohen “recalled speaking with the president’s personal counsel about pardons after searches of his home and office occurred.”

Cohen told the House intelligence committee March 6 that he asked his lawyer at the time, Stephen Ryan, to meet with another Trump lawyer, former New York Mayor Rudy Giuliani, “to explore the possibility of a pardon, because that possibility was constantly being dangled in my face.”

Jordan and Meadows say in their letter that Cohen’s response was “nonsense.”

A spokesman for Cummings and the press office for Democrats on the oversight committee did not comment for this story in response to Jordan and Meadows.

But the committee referred The Daily Signal to Cummings’ May 22 letter to Jordan addressing only the pardon matter.

In the letter, Cummings wrote that the perjury statute requires witnesses to “willfully” testify to something they “do not believe is true.”

“This information indicates that Mr. Cohen was not attempting to conceal this information when he testified before the Oversight Committee, and it fully supports the letter from Mr. Cohen’s counsel clarifying his testimony.”