When the Left Defended the Electoral College 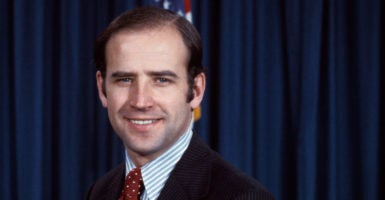 Joe Biden in a portrait taken Dec. 13, 1978, the month after the Delaware Democrat was re-elected to the Senate for the first time and about 30 years before he was elected vice president. The next year, Biden was among Senate liberals defending the Electoral College in debate over a constitutional amendment to elect presidents and vice presidents by popular vote. (Photo: Getty Images)

New York today is part of the movement to choose presidents by popular vote, but 40 years ago a nationally known liberal from the state took to the Senate floor to argue the advantages of the current system.

The Electoral College, Sen. Daniel Patrick Moynihan asserted in his July 1979 speech, forces consensus and allows a president to “govern with the legitimacy that has come of attaining to such diverse majorities.”

The New York Democrat, who died in 2003, had lots of liberal company at the time.

Other Senate Democrats who opposed a constitutional amendment to scrap the Electoral College and elect presidents and vice presidents by direct popular vote included Joe Biden of Delaware, a future vice president, and Bill Bradley of New Jersey, a future presidential candidate.

These Democrats were joined by Edmund Muskie of Maine, the party’s vice presidential nominee 11 years earlier; Paul Sarbanes of Maryland; Thomas Eagleton of Missouri (briefly a vice presidential candidate in 1972); and John Durkin of New Hampshire.

Of those states, Delaware, Maryland, and New Jersey now are part of the National Popular Vote Interstate Compact, an agreement in which states that sign on pledge the votes of their electors to whichever presidential candidate wins the national popular vote.

Four decades ago, though, advocates of a popular vote for president didn’t try to end-run the process of amending the Constitution.

Biden, first elected to the Senate in 1972, served there from January 1973 until he successfully ran for vice president as Barack Obama’s running mate in 2008.

In 1979, Congressional Quarterly reported that senators “crossed party and ideological lines” in the debate over Senate Joint Resolution 28.

The measure was sponsored by Sen. Birch Bayh, D-Ind., an old pro with constitutional amendments who had drafted the 25th Amendment on presidential succession in a crisis as chairman of the Judiciary Committee’s subcommittee on the Constitution.

With bipartisan support and opposition, Bayh’s resolution passed by a vote of 51-48, far short of the two-thirds majority needed for a constitutional amendment. A majority of Republicans opposed the measure.

The Senate breakdown at the time was 61 Democrats, 38 Republicans, and an independent who caucused with the Democrats.

At the time, Congressional Quarterly reported, “three of the Senate’s most liberal Republicans”—John Heinz of Pennsylvania, Charles Percy of Illinois, and Lowell Weicker Jr. of Connecticut—“voted against direct election of the president.”

Weicker eventually left the Republican Party and won the Connecticut governorship as an independent. Both Illinois and Connecticut are among states that joined the popular vote compact.

Since the 1979 debate, Republican presidential candidates twice have won the Electoral College but lost the national popular vote, pushing the debate largely along party and ideological lines.

Under the Bayh amendment, the presidential candidate with the most votes nationally would win. If no candidate got 40%, though, the top two candidates would face each other in a runoff election.

Incidentally, that setup would have imperiled Abraham Lincoln, a Republican who won the 1860 presidential race with 39.8% of the vote against a splintered Democratic Party.

“Take away the Electoral College and the importance of being black melts away,” National Urban League President Vernon Jordan testified during a Senate hearing at the time.

“Blacks, instead of being crucial to victory in major states, simply become 10%  of the electorate, with reduced impact,” Jordan said.

Jordan later became an ally of President Bill Clinton, and was among the cast of characters in the Monica Lewinsky scandal.

The National Urban League has changed its mind, stating in a report last month that it backs moving “the U.S. toward the popular election of presidents through states’ participation in the National Popular Vote Interstate Compact, with the goal of eliminating the Electoral College.”

In an official pronouncement on the 1979 proposal, the American Jewish Congress cited similar reasons for opposing the Bayh amendment, The New York Times reported.

The organization’s statement said blacks and Jews “make up a significant proportion of the electorate in the key states with large electoral votes, and they tend, at least in presidential elections, to vote in a bloc.” It continued:

Hence, the political parties are sensitive to the interests of Jews and blacks both in their selection of candidates and in the adoption of party platforms. In a system of direct election, however, where a vote in one state is equal to a vote in another, that influence will be lost.

In a 2004 report, the Congressional Research Service explained a prevailing view about minority groups during the 1979 debate that helped explain why the presidents of the National Urban League and American Jewish Congress supported the Electoral College:

By virtue of this concentration, they are presumably able to exert greater influence over the outcomes in such states because they tend to vote overwhelmingly for candidates whose policies they perceive to be favorable to their interests, and thus helping to gain these states and their electoral votes for the favored candidates.

Bayh, who died in March after living to see his son Evan Bayh serve as governor and senator from Indiana, became an advocate of the National Popular Vote Interstate Compact. For years, the elder Bayh would blame the 1979 defeat on minority advocates.

In 2012, Bayh told BuzzFeed, “I had an interesting experience, one of the few times I’ve been angry enough to throw people out of my office.”

He said African American and Jewish leaders told him “to get off this Electoral College reform kick. … You dump us into the whole mix, and we’ll get lost.”

A diverse coalition indeed backed a national popular vote in 1979, including the U.S. Chamber of Commerce and the American Civil Liberties Union.

In reporting on their defeat, Congressional Quarterly summarized: “A few northern liberals aligned July 10 with a majority of Republicans and southern Democrats to thwart passage of the direct election amendment.”

Because the Senate passed the measure by only a bare majority, the House didn’t bother taking it up even though in 1970 it had mustered a supermajority in favor.

The 1970 measure died from a Senate filibuster primarily led by Democrat-turned-Republican Strom Thurmond of South Carolina. Interestingly, many segregationists in the South cited voting bloc protections similar to those cited by civil rights advocates in the North in arguing for the Electoral College.

Moynihan led the Democrats’ opposition to the Bayh proposal, calling it the “most radical transformation in our constitutional system that has ever been considered.”

“The Electoral College requires the assembly of consent—again, concurrent majority—in one part of the country and another part of the country, and yet another part, all defined in terms of several states,” Moynihan said. “It has as its extraordinary ability the formation of consensus as between widely differing regions, political purposes and styles, and political agendas.”

The fundamental thrust of this measure, however unintended— nonetheless, it seems to be ineluctably clear—would be to abolish that principle of concurrent majority.

If there is once introduced into the Constitution the idea that a president may routinely be elected by 40% of the vote, you have the most ironic of all outcomes, that in the name of majoritarianism we have abolished even that single majority which the Founders so feared.