If D-Day Were Today, Would Millennials Step Up to the Challenge? 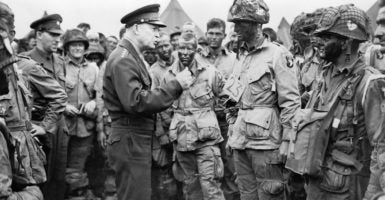 Gen. Dwight D Eisenhower talking with American paratroopers on the evening of June 5, 1944, as they prepared for the invasion of Normandy, Greenham Common, Berkshire, England, June 5, 1944. The men are part of Company E, 502nd Parachute Infantry Regiment, at the 101st Airborne Division's camp in Greenham Common. (Photo: Underwood Archives/Getty Images)

As we celebrate the courage, determination, and resolve of the “Greatest Generation” on June 6—the 75th anniversary of the bloody Allied invasion of Normandy, France, that was the start of the liberation of Europe from Nazi tyranny and oppression—it brings to mind a crucial question.

Would today’s millennials meet the same challenge if faced with a future war, one in which the U.S. and its allies were attacked?

Would they have the grit and fortitude to fight and win to preserve the freedom and liberty of the West that they seem to take for granted and the values that too many of them seem to treat with contempt?

Have they been so coddled, pampered, indulged, and overprotected, and taught to hate what we stand for, that they would fail and let the world slide back into a Dark Age, where freedom was only a remembrance?

More than 1.6 million American military personnel participated in Operation Overlord. It was the largest amphibious assault in history, with more than 2,700 ships and 11,000 airplanes involved in the invasion.

Thousands of paratroopers and glider troops of the famed 82nd and 101st Airborne Divisions jumped into chaos in Normandy the night before, greeted—as were the troops on the beaches—by overwhelming machine gun fire and artillery barrages.

The Allies secured the beaches and a toehold in Europe, but only after losing more than 10,000 killed and wounded, many in gruesome firefights with German troops.

The killed also included those who drowned before they could even get ashore to fight because of the weight of the packs and equipment they were carrying.

As authors Larry Schweikart and Michael Allen recount in “A Patriot’s History of the United States,” German “crossfire slaughtered 197 out of 205 men in a single rifle company” on Omaha Beach.

Allied troops were pinned down by the defenses (barbed wire, mines, tank traps, bunkers, pillboxes, and machine gun nests) that had been planned and prepared by one of the most skilled German commanders of the war, Erwin Rommel, the famed Desert Fox.

When then-Col. (later Brig. Gen.) George Arthur Taylor, who commanded the 16th Infantry Regiment, arrived on Omaha Beach, there were thousands of troops hunkered down in the sand dunes and along the seawall.

With the help of his brave officers and sergeants, Taylor managed to get the Americans to rise up and attack the murderous German defenses, yelling, “There are only two kinds of people on this beach. Those who are dead, and those who are going to die. Now let’s get the hell out of here.”

He was awarded the Distinguished Service Cross for his bravery on what Rommel had accurately predicted would be “the longest day” of World War II.

No one questions the capability, high quality, and professionalism of our armed forces today. But the young men and women who today make up our military—the Air Force, Navy, Army, and Marines—are volunteers.

They are different from so many others in our culture and society today, because they are patriots who have chosen to serve their country and to undertake the often-dangerous jobs that protect our nation from the terrorists, rogue nations, and tyrannical dictators who hate America and everything it stands for and represents.

I don’t question their determination and grit. No one who has seen the way they have fought in Iraq, Afghanistan, Mogadishu in Somalia, and the many other dangerous places of the world could doubt them—or their families, who have supported them through the hard years of repeated deployments and tragic losses.

The same goes for the many millennials who join our law enforcement agencies and persevere in those jobs despite the hostility they face from too many ignorant members of their generation. And I know many, including millennials in my own extended family who cherish the values we hold dear.

But what if we became involved in a lengthy, globe-spanning war, such as a two-front war with communist China, which has been aggressively building up its military because it appears to want to dominate the Pacific the way the Japanese did in World War II, and a resurgent Russian dictatorship or Middle Eastern terrorist state with nuclear weapons?

It seems likely that the United States would have to bring back the draft to enlarge our military forces to cope with such an enormous threat.

The 16 million Americans who volunteered and were drafted when we vastly expanded our military after Japan attacked Pearl Harbor in December 1941 had grown up in the midst of the Depression.

They had risen to adulthood under very tough conditions. Many were malnourished, and those who were ethnic and racial minorities had suffered mistreatment and discrimination. Yet those Americans, including Japanese Americans and African-Americans, joined the armed forces to fight for America.

Compare that with today’s celebrities in Hollywood, who constantly display their dismissive, contemptuous attitude toward America, our history, our unique culture, and the values that have made us a great nation.

Can anyone imagine any of the current hosts of late-night talk shows volunteering to help fight to protect America?

Would the millennials who are terrified by doorbells have the fortitude to fight in a long, costly, intensive conflict?

We have a generation of college students who have grown up in the luxury of modern America, yet who prefer socialism (just another form of tyranny).

They complain about “microagressions” and approve of university speech codes that restrict speech and protect them from anything they don’t want to hear. They occupy (as supposed adults) special rooms set up for them with pillows and stuffed animals to calm and cuddle them when they get upset about the normal frustrations and conflicts of everyday life and contentious political battles.

Would these young Americans display the same courage, determination, and resolve that the young Americans of the Depression era showed if our country needed them? Would they show the same sweeping patriotism and engage in the volunteer efforts that characterized our national response following the vicious terrorist attack on 9/11?

I don’t know the answer to that.

I hope that the tenacity, patriotism, and steadfastness of the Americans who stormed the beaches at Normandy have not been lost, and that the society and culture that produced those men has survived, despite the constant attacks on it that we see in academia, in pop culture, and in our politics.

Let’s hope that we never have to find out and that our sons are never again faced with a hostile shore in a foreign land.