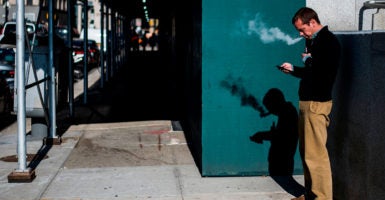 A man smokes an electronic cigarette, also known as an e-cigarette, in New York on Nov. 15, 2017. (Photo: JEWEL SAMAD/AFP/Getty Images)

Sometimes, it feels like we live in Bizarro World, where everything is the opposite of what we would expect.

Consider, for example, the regulation of e-cigarettes and other alternatives to traditional cigarettes. Those who advocate policies that would help maintain existing levels of cigarette smoking are somehow viewed as the “righteous.”

The Tobacco Control Act, which gave the Food and Drug Administration the power to regulate tobacco products, is creating major obstacles for the sale of e-cigarettes and other alternative products, thereby doing more to block cigarette smokers from quitting than allowing them to stop.

This all needs to change.

One of the leading tobacco researchers, the late Michael Russell, famously said, “People smoke for nicotine but they die from the tar.”

It’s the burning of tobacco that releases thousands of harmful chemicals. New products like e-cigarettes reflect this understanding, delivering nicotine without burning tobacco.

That doesn’t necessarily mean they are safe, but the research shows that they are less harmful than combustible cigarettes.

In the most comprehensive government report of its kind, Public Health England described e-cigarettes in 2015 as “95% less harmful that tobacco cigarettes.”   The FDA also recognizes that these new products are less harmful than combustible cigarettes.

Yet, the FDA, through its implementation of the Tobacco Control Act, has issued regulations that will effectively put an end to many alternative products that are currently available to smokers.  Specifically, the FDA is requiring these products to go through the costly and burdensome pre-market tobacco-application process. That’s a barrier that, once enforced, will jeopardize the continued existence of many of these products.

Ironically, some e-cigarette opponents irrationally justify their dislike for the products based on a dislike of big tobacco companies.  Yet, the big tobacco companies and other big businesses are the ones that will be able to afford the costly approval process, while the many small businesses in the field will likely cease to exist.

The entire narrative and policy debate around e-cigarettes ignores the critical benefits of these products.  Instead of shouting from the mountaintops that private innovations are now available that can help reduce cigarette smoking, the FDA is using concern over youth usage of e-cigarettes as a way to demonize the products.

To be clear, the FDA should be concerned about youth usage of nicotine delivery products; nicotine is addictive and the safety of these new products still needs to be monitored.  The FDA, however, shouldn’t be using this concern as a reason to promote policies that would help maintain current levels of smoking or prevent Americans from having access to products that could save their lives. Nor should they be diverting attention from the critical importance of these alternative products.

Underlying this entire narrative is an unfortunate and arguably dangerous conflating of two very different issues: the harmful and cancer-causing effects of smoking cigarettes and the harmful effects of nicotine.  Smokers get cancer from the combustion of cigarettes, not the nicotine.

This is a true crisis, arguably caused in large part by government messaging.  If cigarette smokers don’t even know that e-cigarettes are less harmful than cigarettes, then they don’t have much reason to switch.

So what should Congress do?

Legislators should take immediate action to eliminate looming regulations that would effectively block the sale of many e-cigarette and alternative products.  They should also carefully review how federal agencies are contributing to the misinformation that exists regarding these products, and take steps to address this problem.

In addition, Congress should ensure that the FDA reasonably addresses legitimate concerns regarding youth usage of e-cigarettes, without undermining adult access to these products.

According to the Centers for Disease Control and Prevention, “cigarette smoking is the leading preventable cause of death in the United States.”  E-cigarettes and other alternative products can help change this.  That’s something Congress shouldn’t forget.