American Soldiers on D-Day Set the Bar for Courage 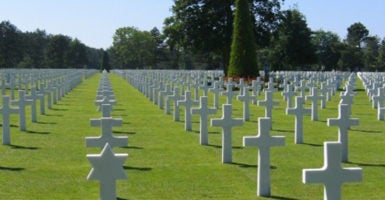 Rows of white marble crosses and stars of David at the Normandy American Cemetery and Memorial in Colleville-sur-Mer, France, during the author's visit in 2003. (Photo: Nolan Peterson/The Daily Signal)

KYIV, Ukraine—This week we honor the soldiers who saved Europe by storming the beaches of Normandy 75 years ago on D-Day—June 6, 1944.

These soldiers were not born and bred to be warriors.

No, they were born as free men, with other plans besides going to war. Family. Career. A life lived with purpose in peace and in pursuit of happiness. These were the ordinary dreams of ordinary men.

But fate had the last word. Theirs was a generation unfortunately born into a historical moment that demanded exceptional sacrifices.

Civilization was on the brink of self-destruction 75 years ago, when these young men sacrificed the unrecoverable currency of their youth so that succeeding generations could live in a world where history does not begin and end, like the waist of an hourglass, with the fascist conquest of Europe.

In the summer of 2000, a few weeks before I reported for basic training at the Air Force Academy, I had a dream that I was an American soldier on D-Day. In the dream, I was a coward. I could not fight from fear.

When I awoke, I felt ashamed, even though it was only a dream. I remember worrying if I truly had the right stuff to endure combat with courage.

I was just 18 at that time, and it was more than a year prior to the terrorist attacks of Sept. 11, 2001. So, I’ll be honest—I didn’t seriously consider then that I would ever go to war in my lifetime. Rather, I was thinking about a life of travel and adventure as an Air Force pilot.

Going to war was never really a part of the picture. Many people my age and older shared that opinion at that time. Today, I look back and think how naive we all were.

This week, as we celebrate the 75th anniversary of the D-Day landings, I reflect on that long-ago dream of mine, and its significance.

You see, on the eve of my induction into the profession of arms, it was the imagined image of American soldiers on D-Day that symbolized the high expectations of moral character that were to be demanded of me as an Air Force officer.

That dream also foretold the hard realities of the coming war, which I could not foresee but would soon engulf my generation—and still does.

There’s something uniquely impressive about the Normandy American Cemetery and Memorial in Colleville-sur-Mer, France.

If you’ve been there, then you know what I mean. If not, you should try to go sometime. I promise it’s worth the effort. It’ll make you proud.

You’re liable to be at a loss for words as you walk among the perfectly arrayed columns and rows of white marble crosses and stars of David. Or when you look down from the heights toward Omaha Beach below. That long stretch of sand, smoothed by the tides, calm and beautiful.

To reach the height of land where the cemetery now sits, U.S. Army troops from the 1st and 29th Divisions fought across 200 yards of exposed beach and up steep bluffs. On Omaha Beach alone, 2,000 U.S. troops were killed or wounded or went missing.

Nowadays, it’s hard to imagine that it’s the place where so many soldiers died 75 years ago.

I visited the Normandy American Cemetery and Memorial for the first time in 2003, during my senior year as an Air Force Academy cadet. I was in France on a semester-long exchange program with the French Air Force.

My pre-9/11 innocence had been shattered by then. Our country was at war, and it was the era of freedom fries and what not. Not the apogee of Franco-American relations, to be sure.

Still, I’ll never forget the effusive expressions of thanksgiving I received—as well as all the free meals and glasses of wine—while touring Normandy, clad in my Air Force blues.

For a young man who was pondering the certainty of going to war in the near future, I was a little uneasy receiving expressions of gratitude for the bravery of others, which I’d done nothing yet to earn.

Still, I understood then as I do now that it was the uniform I wore that deserved the praise, not me. I was simply a torchbearer for my country’s legacy of courage.

Yes, America had the military-industrial edge in World War II. It turned out that we had the economy and the weapons and the technology and the bottomless wellsprings of bullets and bombs that so many historians say guaranteed our ultimate victory.

Yet, in the end, it all came down to whether America’s soldiers, and those of our allies, had the courage to storm from the landing craft and put that advantage in materiel to work against the enemy.

America’s vaunted industrial might would count for nothing if its soldiers weren’t brave enough to use it in combat. Well, lucky for us, they were. And so we live in a world today where the dark forces that nearly conquered the world in the 1940s remain held at bay.

There’s no marvel of military weapons technology that ever can compare with the will of free men to fight for a just cause.

A Lesson to Remember

I admit it’s easy to believe that D-Day was simply another chapter of history as alienated from our time as the wars of Alexander the Great or Napoleon. We assume that history automatically arcs in the right direction, and the era of world wars is over.

It could never happen again, we may fool ourselves into believing.

The thing is, you and I are no different in our genetic coding than the humans who were alive 75 years ago. My 94-year-old grandmother was alive for D-Day and the Holocaust and the battles for Stalingrad and Iwo Jima.

Her generation both survived and created those cataclysms.

Are we any different?

The truth is, the one unavoidable law of human history is that we are destined to repeat the tragic mistakes of our forebearers.

So as we honor the heroism and glorious accomplishments of the greatest generation, let’s also remember that our species’ survival suspends from a tenuous thread.

And let’s hope that the next time the fate of the world is in danger, we will have raised a new generation of young men and women equally as courageous as those brave soldiers from 75 years ago, who fought on that day of days.