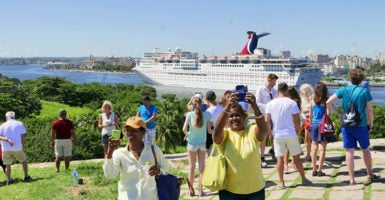 The cruise ship Carnival Paradise arrives in Havana on June 30, 2017. The ship, which carries more than 2.400 passengers, became the most populated cruise ship ever to dock in Cuba. (Photo: Alexander Creutzmann/Mambo photo/Getty Images)

The Trump administration moved Tuesday to impose new restrictions on travel from the United States to Cuba, halting cruise ships from going to the island nation in keeping with a memorandum from the president two years ago.

The new rules, coming from the departments of Treasury and Commerce, will end some travel allowed under the reopening of relations with Cuba during the Obama administration.

Some nonfamily, education-related travel will be allowed under the rule changes, according to the Trump administration.

However, the rules will prohibit “recreational vessels,” meaning cruise ships, from traveling from the United States to Cuba.

The rules will take effect Wednesday.

Cuba continues to play a destabilizing role in the Western Hemisphere, providing a communist foothold in the region and propping up U.S. adversaries in places like Venezuela and Nicaragua by fomenting instability, undermining the rule of law, and suppressing democratic processes.

This administration has made a strategic decision to reverse the loosening of sanctions and other restrictions on the Cuban regime. These actions will help to keep U.S. dollars out of the hands of Cuban military, intelligence, and security services.

The Trump administration is simply enforcing a law passed by a bipartisan majority in Congress and signed by President Bill Clinton, said Ana Quintana, senior policy analyst for Latin America and Western Hemisphere at The Heritage Foundation.

Both Barack Obama and Clinton are Democrats.

“The policy now in place puts the United States back into compliance with U.S. law after executive actions from the Obama administration took us out of compliance,” Quintana told The Daily Signal, referring to the Cuba Liberation and Democracy Solidarity Act.

Travel by cruise ship from the U.S. to Cuba was allowed beginning in May 2016, bringing 142,721 visitors in the first four months of the Obama administration’s loosened restrictions, the Associated Press reported.

The cruise industry isn’t likely to welcome the changes.

“We are closely monitoring these recent development and any resulting impact to create travel to Cuba,” Norwegian Cruise Lines said in a written statement. “We will communicate to our guests and travel partners as additional information becomes available.”

The administration first announced the planned changes April 17. The new actions are in line with Trump’s stated goals in a presidential memorandum dated June 16, 2017, and titled “Strengthening the Policy of the United States Toward Cuba.”

That document was geared at overturning much of the Obama administration’s normalization of relations with Cuba.

“Cuba remains communist, and the United States, under the previous administration, made too many concessions to one of our historically most aggressive adversaries,” Commerce Secretary Wilbur Ross said in a formal statement, adding:

The Trump administration recognizes the threat Cuba’s government poses in the region, and the Commerce Department is acting to limit commercial activity that provides revenue for the Cuban regime. Holding other countries accountable remains a focus for this administration and we will remain vigilant.