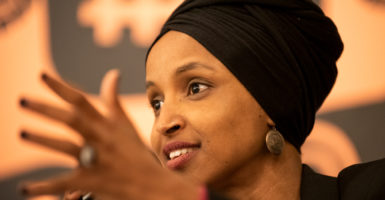 Rep. Ilhan Omar, D-Minn., impugned the motives of religious conservatives, accusing them of not caring for the unborn while ignoring their pervasive work. (Photo: Stephen Maturen/Getty Images)

Rep. Ilhan Omar, D-Minn., unleashed a scathing statement on the House floor on May 22, in which she attacked conservatives and pro-life Americans, accusing them of hypocrisy and inconsistency, among other things.

She was responding to the wave of pro-life bills that have recently swept state legislatures. And she was wrong, point after point.

1. Pro-Life Americans are not theocrats.

Religious fundamentalists are currently trying to manipulate state laws in order to impose their beliefs on an entire society, all with complete disregard for voices and the rights of American women. The recent efforts like those in Alabama and Georgia are only the latest in a long history of efforts to criminalize women for simply existing. To punish us, when we don’t confirm to their attempts to control us. But because it’s happening here, with the support of the ultra-conservative religious right, we call it religious freedom.

Omar here is saying that people who advocate for the unborn through legislation (like the abortion bans passed in Alabama and Georgia) are simply religious people trying to impose their beliefs on society under the guise of religious freedom. It’s unclear if the attack here is mostly on pro-life advocates or religious liberty advocates.

While these groups overlap, they aren’t always one and the same. I know pro-life folks who are pro-life because of science, not religion, and I know religious freedom advocates who aren’t religious at all themselves.

What is clear is that she was attacking religious freedom, smearing it as a crusade aimed at discrimination and misogyny against women.

We’ve seen a bevy of cases in recent years stemming from religious liberty—whether it be a cake baker wishing to obey his conscience, or the effort to dismantle a WWI veteran’s memorial simply because it is shaped like a cross. These are hardly efforts to “control” women. Rather, they are rooted in the freedoms protected by the First Amendment.

Religious liberty is a hot topic today, but it is a core element of our nation’s founding. In fact, it’s why America began in the first place: because Puritans wanted a place to worship freely.

But Omar didn’t even see fit to give a nod to that heritage.

2. Pro-life Americans have a huge track record of caring for mothers and children.

Omar went on to impugn the motives of religious conservatives, accusing them not only of not caring for the unborn, but for mothers and children:

This is a lie the left has perpetuated for decades. While it is true that Roe v. Wade ignited a wave of activism that created optics centered on defending the unborn, the fact is that pro-life Americans care about the whole life—born and unborn. And the data prove it.

In 2018, 2 million women were served through pregnancy resource centers, according to the Charlotte Lozier Institute. These centers exist not just to keep a woman from aborting, but to help a woman should she decide to raise the baby or put the baby up for adoption.

When the Supreme Court heard NIFLA v. Becerralast year—a case dealing with pregnancy resource centers—the Catholic Association filed a brief showing how the lives of 13 women had been transformed because of the aid they received from pregnancy centers in California.

As far as children “languishing in hunger and facing homelessness” go, research shows that faith-based adoption agencies “have been a cornerstone of the child welfare system for decades.” Aid organizations like the Red Cross, Compassion International, and Bethany Services all have religious roots, showing that religious people have cared for the neediest, most helpless among us for decades.

3. Pro-life Americans are not forcing religion on anyone.

People who passionately advocate for the unborn are often accused of trying to push their faith onto others, but nothing could be further from the truth.

Omar suggested pro-life legislators are passing six-week abortion bans in the name of religious freedom. But this is also untrue. The right to “free exercise” of religion is, of course, vitally important, but a six-week abortion ban is not dependent upon religion. Science itself makes the case against abortion. Life is a right, and if life begins at conception, these unborn babies deserve legal protection afforded to them by the state.

Furthermore, Christian conservatives do not enter the political arena for selfish reasons. They don’t advocate for their own liberties and no one else’s, so that they can reap the benefits and pass down punitive measures to everyone else who isn’t religious. That’s simply not true, and it would be unchristian.

There are multiple organizations peppered across the United States—the Becket Fund for Religious Liberty, Alliance Defending Freedom, and First Liberty, to name a few—which go to bat for religious people in court, not because their rights are preeminent but because they are often marginalized and discriminated in our day (see the Masterpiece Cakeshop case).

In fact, here’s a comprehensive list from 2011-2017 of discrimination cases against religious people, not the other way around.

Omar has the right to represent her constituents in Minnesota, but the arguments she made in this brief speech are horrendously flawed, unsubstantiated, and for the most part, plain smears against conservatives meant for show.