4 Things to Know About House Democrats’ ‘Dream and Promise’ Amnesty 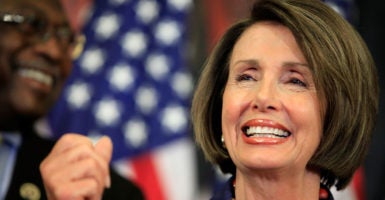 The House has passed legislation 237-187 that would grant citizenship to an estimated 2.5 million undocumented immigrants, in a largely party-line vote.

“Americans see the wonderful contributions of America’s #Dreamers every day in communities nationwide,” Rep. Lucille Roybal-Allard, D-Calif., tweeted before the vote. “As the House passes the Dream and Promise Act today, we are taking a stand for these patriotic, inspiring young Americans.”

The legislation would allow people who came to the country illegally as children under President Barack Obama’s Deferred Action for Childhood Arrivals and persons eligible for Temporary Protected Status and Deferred Enforced Departure to bypass deportation and obtain a pathway to citizenship.

Rep. Andy Biggs, R-Ariz., tweeted before the vote that the legislation will only worsen the situation on the southern border.

“House Democrats are about to pass a massive amnesty bill for illegal aliens that will significantly contribute to the crisis that we’re experiencing on our border,” he said.  This bill removes deterrents [and] buttresses incentives.”

Seven Republicans voted for the legislation. No Democrats voted against it.

The measure is not likely to gain traction in the Republican-controlled Senate, for at least four reasons:

The legislation would do nothing to prosecute criminal illegal immigrants.

“Applicants with several misdemeanor convictions can obtain a green card, even if the misdemeanors were violent and resulted in death or bodily injury,” according to a critique of the measure from House Minority Whip Steve Scalise, R-La.

Moreover, the Secretary of Homeland Security is prohibited from using gang databases of state or federal agencies to keep gang members from obtaining green cards.

2. It Fast-tracks Citizenship for Illegal Immigrants.

“Whereas most legal immigrants are granted green cards on a discretionary basis, H.R. 6 mandates issuance of a green card to eligible illegal immigrants who receive a waiver, or meet its lax requirements,” Scalise’s summary states.

Rep. Val Demings, D-Fla., touted the legislation on Twitter, saying that those brought to the United States illegally as children “deserve” it.

“Americans agree that the #DREAMers are part of our communities and deserve a path to citizenship. They were brought here as children. Many don’t even know they’re undocumented until they become adults. They deserve a fair shot to live their dreams,” Demings tweeted.

Rep. Chip Roy, R-Texas, said the legislation comes with a hefty price tag, tweeting Tuesday that it costs “$34.6 billion, according to @USCBO, while providing $0 (ZERO) dollars for border security. It does not close immigration loopholes, #FixOurBrokenAsylum laws, and constitutes a 2.7 million+ amnesty deal.”

4. It Doesn’t Include Money for a Border Wall.

Not one dime for border wall funding is included in the legislation.

“The fact that Democrats today are more willing to spend $34 billion to grant amnesty to millions of illegal immigrants instead of attacking the underlying problem of border security shows just how out of touch they have become,” Jessica Anderson, vice president of Heritage Action for America, the lobbying affiliate of The Heritage Foundation, told The Daily Signal in an email.

“This bill does not include any funds for border security, closing loopholes or reforming asylum laws, and instead will further exacerbate our very real problems at the southern border,” Anderson added.