There Is No Evidence Weather Is Increasingly Threatening to Human Lives 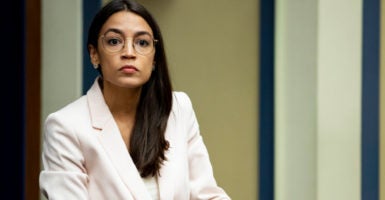 "Different parts of the country deal with different climate issues," Rep. Alexandria Ocasio-Cortez, D-N.Y., cautioned as she warned of extreme tornadoes. "But ALL of these threats will be increasing in intensity as climate crisis grows and we fail to act appropriately."(Photo: Anna Moneymaker/Getty Images))

Climate isn’t the same as weather — unless, of course, weather happens to be politically useful. In that case, weather portends climate apocalypse.

So warns Elizabeth Warren as she surveyed Iowan rainstorms, which she claims, like tornadoes and floods, are more frequent and severe. “Different parts of the country deal with different climate issues,” Alexandria Ocasio-Cortez, D-Malthusia, cautioned as she too warned of extreme tornadoes. “But ALL of these threats will be increasing in intensity as climate crisis grows and we fail to act appropriately.”

Even if we pretend that passing a bazillion-dollar authoritarian Green New Deal would do anything to change the climate, there is no real-world evidence that today’s weather is increasingly threatening to human lives. By every quantifiable measure, in fact, we’re much safer despite the cataclysmal framing of every weather-related event.

How many of those taken in by alarmism realize that deaths from extreme weather have dropped somewhere around 99.9 percent since the 1920s? Heat and cold can still be killer, but thanks to increasingly reliable and affordable heating and cooling systems, and others luxuries of the age, the vast majority of Americans will never have to fear the climate in any genuine way.

Since 1980, death caused by all natural disasters and heat and cold is somewhere under 0.5 percent.

It’s true that 2019 has seen a spike in tornadoes, but mostly because 2018 was the first year recorded without a single violent tornado in the United States. Tornadoes killed 10 Americans in 2018, the fewest since we started keeping track of these things in 1875, only four years after the nefarious combustion engine was invented.

After a few devastating hurricanes around a decade ago, we were similarly warned that it was a prelude to endless storms and ecological disaster. This was followed by nine years without a single major hurricane in the United States.

According to the U.S. Natural Hazard Statistics, in fact, 2018 saw below the 30-year average in deaths not only by tornadoes and hurricanes (way under average) but also from heat, flooding and lighting. We did experience a slight rise in deaths due to cold.

Pointing out these sort of things usually elicits the same reaction: Why do you knuckle-dragging troglodytes hate science? Well, because science’s predictive abilities on most things, but especially climate, has been atrocious. But mostly because science is being used as a cudgel to push leftist policy prescriptions without considering economic tradeoffs, societal reality or morality.

There are two things in this debate that we can predict with near certitude: First, that modern technology will continue to allow human beings to adapt to organic and anthropogenic changes in the environment. Second, that human beings will never surrender the wealth and safety that technology has and continues to afford them.

People who deny these realities are as clueless as any “denier” of science. Which brings me back to Democrats.

There have been a number of stories predicting that 2020 will finally be the year politicians start making climate change an important issue. One can only imagine these reporters started their jobs last week.

It’s true that a number of Democrats presidential hopefuls have taken “no fossil fuel money” pledges — as if they were going to get any of that cash anyway — as they spew carbon into the atmosphere searching for another bad-weather photo-op. Kevin Curtis, executive director of NRDC Action Fund, told BuzzFeed News that all of this was “really wicked cool.”

The 2018 midterm elections, adds Anthony Leiserowitz, director of the Yale Program on Climate Change Communication, are when “climate change was beginning, for the first time, to play a significant role in a few races across the country.”

A poll conducted by that very same Yale Program on Climate Change Communication found that even for the most left-wing voters, climate change — an imminent planetary tragedy that threatens the existence of all humanity and most animal species — ranked third on the list of most important issues. It ranked 17th among all voters, behind things like border security, tax reform and terrorism.

Maybe one day the electorate will finally buy in. Climate change, though, didn’t even make a blip on exit polls of 2018. Which is why Democrats keep ratcheting up the hysteria over every environmental tragedy.

“Climate chaos is here,” declares Merkley, “but it’s not too late to act.” Remember: When disaster is perpetually 10 years away, it’s never too late to send Democrats some of your money.