Franklin Graham Calls on People to Pray for Trump This Sunday 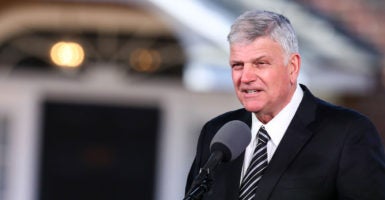 Franklin Graham may not agree with Speaker Nancy Pelosi, D-Calif., on much, but apparently, they have one thing in common: They both pray for Donald Trump.

At a press gaggle last week, the House leader surprised everyone by saying, “I pray for the president of the United States.”

Of course, what she prays is another story, but that she prays means her party has no excuses. This Sunday’s invitation is for everyone—no matter which side they’re on—to join hands and pray for America.

On June 2, Graham and 250 Christian leaders are calling on people to set aside time in earnest prayer for Trump.

When I talked to him on Tuesday’s “Washington Watch” about what prompted the idea, he says he felt an urgency in his heart.

The attacks on the president are intensifying, he explained, to a level we’ve never seen before.

The politics that we have today, it’s so vicious. It wasn’t like this when I was growing up. Republicans and Democrats disagreed, but they’d go out and have dinner at night together. But that’s not the case anymore, Tony. It’s almost like we’re in some kind of war, and it’s about winning. It’s not about what’s best for the country.

There’s a hatred for Trump, Graham went on, “that I’ve never seen before. It’s one thing to have a president that we disagree with and you may not vote for—but to have the all-out hatred … [It] distracts the president, and it weakens our country … We need to get on with the business of solving the problems in our country—and this isn’t solving them.”

Just because some Americans didn’t vote for Trump doesn’t mean they don’t have a stake in his presidency.

He was elected, and we should get behind him. And if he does well, then we all benefit, don’t we? Republicans and Democrats, independents—we all benefit from this. If he makes a bad decision, then we’re all gonna pay for it. So we need to be praying that God will use him to make good decisions.

A lot of us disagreed with the policies of the previous president, but we still prayed for him. Like a lot of believers, I spent eight years asking God to change Barack Obama’s heart and give him wisdom.

Why? Because I trust that he can work through everyone. Even if some of these leaders don’t seek God themselves, they’re still influenced by people praying for them.

At its core, America’s problem isn’t political—it’s spiritual. “God is the only on who can fix the issues in our country,” Graham agreed. But the responsibility, he reminded listeners, falls on us. “If we Christians don’t pray, then we’re at fault if something were to destroy our country.”

And if America is sidelined or distracted from its ability to influence the world, everyone suffers. One look at today’s headlines will tell you that this is no time for our leaders to take their eye off the ball.

Look at Pastor Andrew Brunson in Turkey, Graham said by explanation. “He’d still be in that prison if it hadn’t been for Donald Trump.”

This president “wants to support and defend Christians … And he has a desire to help the church, [which] I appreciate about him. Is he a perfect person? Absolutely not. Is he the best example of the Christian faith? No way. But there’s something in his heart [that God has placed there] to defend the Christian faith and religious liberty. And so, we need to try to lift him up in prayer and support them where we can.”

If you and your church want to join in, visit the Billy Graham website or Franklin Graham’s Facebook page.

“We know God hears the prayers of one righteous person,” the son of the famous evangelist reminded us. “But if there’s millions of people praying, maybe God will listen and hear those prayers—and answer.