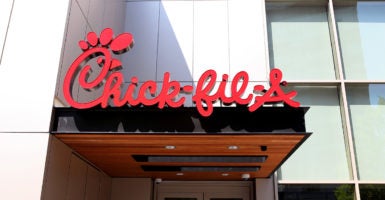 The Department of Transportation says it received complaints "alleging discrimination by two airport operators" against Chick-fil-A over "expression of the owner’s religious beliefs.” Pictured: A Chick-fil-A franchise in Atlanta. (Photo: Raymond Boyd/Getty Images)

The U.S. Department of Transportation announced Friday that it will investigate whether two airports violated federal law or transportation regulations by denying a contract to Chick-fil-A on religious grounds.

“The Department has received complaints alleging discrimination by two airport operators against a private company due to the expression of the owner’s religious beliefs,” DOT said in a statement. “FAA’s Office of Civil Rights has notified the San Antonio International Airport (SAT) and Buffalo Niagara International Airport (BUF) that it has opened investigations into these complaints.”

The San Antonio city council passed a motion March 21 to approve the Food, Beverage and Retail Prime Concession Agreement with Paradies Lagardère for the San Antonio International Airport with the condition that Chick-fil-A be excluded from the agreement.

Councilman Roberto Treviño, who initially made the motion against Chick-fil-A, claimed the fast food restaurant expressed “anti-LGBTQ behavior” and that the ban reaffirmed that San Antonio is a champion of “equality and inclusion.”

The prohibition came after a report noted that in 2017, Chick-fil-A donated nearly $2 million to the Salvation Army, Fellowship of Christian Athletes, and the Paul Anderson Youth Home. The report asserted that the three charities were discriminatory against LGBTQ individuals.

The ban received massive backlash, with many citing religious discrimination. Rep. Chip Roy, R-Texas, who represents the portion of San Antonio where the airport is located, also slammed the decision as “rampant discriminatory action” and warned it may impact how he advocates for San Antonio while serving in Congress.

“When I announced my investigation of the city of San Antonio for its blatant discrimination against Chick-fil-A, I also brought this matter to the U.S. Department of Transportation’s attention,” Paxton told The Daily Caller News Foundation. “I had complete confidence Secretary Chao would recognize, as her office has today, that the city of San Antonio’s intolerant actions warrant investigation.”

“Blatant discrimination based on the religious beliefs associated with a company and its owners violates the Constitution and is inconsistent with both Texas and federal law,” he added.

The Niagara Frontier Transportation Authority decided against its plan to install a Chick-fil-A franchise at the airport after New York state Rep. Sean Ryan, a Democrat, voiced his disapproval.

“The views of Chick-fil-A do not represent our state or the Western New York community, and businesses that support discrimination have no place operating in taxpayer-funded public facilities,” Ryan wrote in a lengthy Facebook post in April. “I urge you to reverse this decision and identify a different restaurant to operate at the airport.”

“FAA notes that Federal requirements prohibit airport operators from excluding persons on the basis of religious creed from participating in airport activities that receive or benefit from FAA grant funding,” the Transportation Department’s statement continued. “The findings of the investigations will be communicated to the complainants once the investigations are completed.”