My Fight for 1 College to Say the Pledge of Allegiance 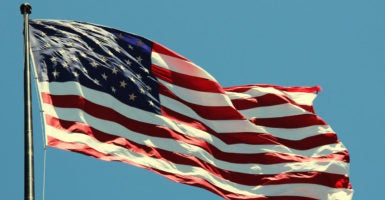 "For me, being an American is precious. We have freedoms in this country that no other country, even Europe, no other nation on earth has, notably in the Bill of Rights," says Celeste Barber. (Photo: Valdet Hulaj / EyeEm/Getty Images)

Celeste Barber was an English instructor at Santa Barbara City College for 20 years.

It’s important for me to stand up for our flag and have the right to say the Pledge of Allegiance, not demand it, for others to say it, but for me to have the right, because I’m an American.

My name is Celeste Barber, and I happily taught 20 years as an English instructor at Santa Barbara City College in California.

My story begins when I realized that the Santa Barbara City College board of trustees had discontinued saying the Pledge of Allegiance. I wrote to the president, requested it be brought back. He wrote back informing me that he had intentionally taken the pledge off the agenda because it was rooted in racism, white nationalism, and nativism

I decided to show up at the next board of trustees meeting with a flag, because I didn’t know if we’d still have a flag there, and I gave them my reasons why I recite the pledge.

Then at the end, I recited the Pledge of Allegiance. During that time, I was heckled and harassed, and feet stomped.

It was led first by one particular faculty member, and then others joined in with her, staff members, and then eventually the students joined in. These were my own colleagues.

No one among the people up there stood up for me, told them to stop what they were doing. My own peers, people who teach, work at our local community college.

Respect for our flag is under attack nationally, and the worst thing that we can do as American citizens is to be complacent.

I would urge parents, grandparents, taxpayers to inquire: What’s going on at your child’s school? Are they saying the pledge? Are they singing a patriotic song?

Go to your local board meeting, city council, county supervisors. Are they reciting the pledge? Are they respecting our traditions? And if not, demand that they bring them back.

For me, being an American is precious. We have freedoms in this country that no other country, even Europe, no other nation on earth has, notably in the Bill of Rights.

And darn it, I will stand up and I will respect our flag. I taught my son to do so, and my grandchildren do. I love our flag, and you can’t stop me from saying it.