Ralph Northam: Proof That Liberals Excuse Racism If You’re One of Them 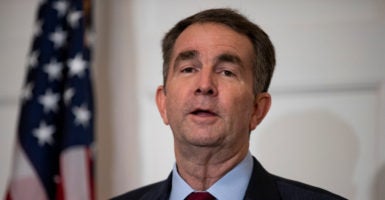 Virginia Gov. Ralph Northam came under a firestorm of scrutiny last February when a photograph surfaced from his college yearbook page depicting two men dressed in racist costumes. One man wore a KKK robe, the other man wore blackface.

Northam immediately apologized, saying, “I am deeply sorry for the decision I made to appear as I did in the photo and for the hurt that decision caused then and now.”

Yet less than 24 hours later, Northam retracted his apology and said he was not either man in the photo. So we are to believe that his admission of guilt the day before was just him misremembering being part of an extremely racist photo.

In the months since, private law firm McGuireWoods conducted an investigation into whether Northam was in fact in the photo. It determined there was no conclusive way to confirm or deny whether Northam was one of the two men. The firm interviewed more than 52 people. Now, Northam is sticking to his ridiculous story of misremembering.

So, is this investigation the last word for residents of the Commonwealth? Is it time to move on and let the governor serve out the rest of his term in office with no more talk of blackface photos?

If Northam were a Republican, we know without question what the answer would be. The mainstream media would not stop until Northam packed his bags and left the governor’s mansion. He would be gone.

It doesn’t take a four-month investigation to see through Northam’s deception. One does not admit to a wrong so deplorable as dressing up in blackface or a KKK outfit, only to realize he misremembered. Such behavior is extremely damaging to any politician, and Northam had no earthly reason to admit any wrongdoing unless he was actually guilty.

Ida B. Wells-Barnette, an African-American investigative journalist who uncovered the injustice of lynchings in the early 20th century, said, “The way to right wrongs is to turn the light of truth upon them.” So it is in this case.

As Bible-believing Christians, we believe in forgiveness. But forgiveness does not mean letting a man keep his public office if he denies the wrongdoing that he clearly committed. The fact that Northam refused to take responsibility for his actions is reason enough to ask for him to leave.

When the photo was taken, Northam was a 25-year-old medical student. Does he really expect us to believe he cannot remember dressing up in a KKK outfit, or blackface? He really can’t remember if he or a buddy stood smiling in a picture with shoe polish all over his face to demean African-Americans?

Does he remember that his nickname was “Coonman”? Were these actions so run-of-the-mill for Northam that behaving in such a manner was not significant enough to remember?

When Northam finally is able to own up to his actions from 30 years ago, he should also own his actions during the 2017 governor’s race. He had the audacity to label his opponent, Ed Gillespie, a racist, with far thinner evidence than being caught in a photo dressed as a clansman. Northam routinely cast Gillespie a racist because of his opposition to sanctuary cities.

Modern-day “woke” liberals weaponize race when it suits their interests, and ignore actual racism when it cuts against their narrative. The same liberals who would call Dr. Ben Carson, Condoleezza Rice, and Sen. Tim Scott, R-S.C., sellouts are now mum over blackface and KKK photos.

The left is sending a clear message: Be one of us, and we’ll overlook the worst of your sins.