A Memorial Day Reminder From Iraq 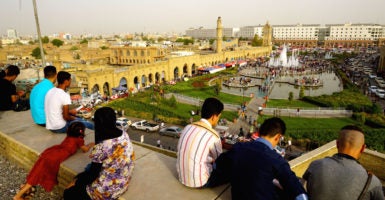 ERBIL, Iraq—A quick story about the meaning of Memorial Day from the capital of Iraqi Kurdistan.

My driver was a handsome man in his mid 30s—about my age. I gave my destination in English, and he softly replied in Kurdish-accented English, “No problem.”

A moment later, I asked, “So you speak English?”

“Did you learn in school?”

My interest piqued. I paused, then introduced myself and told the driver my background and why I was in Iraq.

“My name is Safeen,” he said, adding: “I love America. I have many friends who are American soldiers.”

“Do you still keep in touch with them?”

“Of course,” Safeen said before proudly rattling off a list of names and ranks.

“I used to speak English so well, but I forget,” he said. “It frustrates me.”

I assured him he was doing fine. Then, with renewed confidence in his English-speaking chops, Safeen proceeded to breathlessly explain how, beginning in 2004, he had been an interpreter for the U.S. Army. He said he had worked alongside U.S. troops in combat in Baghdad, Kirkuk, Mosul, and Fallujah.

Safeen said he was already a Kurdish peshmerga soldier before the 2003 U.S. invasion to topple the regime of Saddam Hussein. When the war began, his commander asked for 10 volunteers who spoke English to work with the U.S. Army as interpreters. So, Safeen volunteered and proudly performed his duty, he explained, but the war left scars. Both the visible and invisible kinds.

“I was in an American Humvee in Fallujah,” he said. “A terrorist bomb did this to my face. You see my face?”

He had scars across his cheeks. They weren’t striking, and I’d hardly noticed them when I first got in the taxi. But the scars were there, all right.

“I have a wife and two kids now, so no more war,” Safeen continued. “I used the money the Americans gave me to buy a nice house. I have a good life here in Erbil. It’s very safe. It’s very good.”

He went on talking about the war as he expertly zipped through traffic. One soldier’s name kept coming up—a “Sgt. Bill.” Safeen told his stories about Sgt. Bill with verve and a big smile plastered on his scarred cheeks.

I asked if he was still in touch with Sgt. Bill.

Safeen did not immediately reply. Rather, he shook his head and squinted his eyes like he was holding something back. A lack of vocabulary wasn’t responsible for his silence, I understood. Some memories are simply too painful to find the words to explain, no matter what language you’re speaking.

I said nothing more about it.

When we arrived at our destination a few minutes later, Safeen steadfastly refused my money.

“Can’t I give you anything?” I asked.

“Of course not,” Safeen told me.

He wrote his number on a card and gave it to me.

“If you need anything while you’re in Iraq, you tell me,” he said.

We shook hands goodbye. After I’d stepped out, Safeen said one more thing to me before I closed the door.

I agreed, and we parted ways.

Now, sitting alone with a quiet moment to think, I understand the significance of meeting Safeen.

After all, Memorial Day is on Monday. A solemn holiday, it’s an occasion to honor those who died in service to the United States. The real heroes.

As a veteran of the wars in Iraq and Afghanistan, it stings to think about the friends I’ve lost. Also, I reluctantly confess that I sometimes question what my generation of veterans achieved and what our friends died fighting for.

The fact is, we spent the unrecoverable currency of our youths in wars that never really ended. We didn’t win or lose—we just never finished. Instead, another generation is now taking our place on those faraway battlefields. The endless seasons of waxing and waning violence go on and on and don’t look likely to end anytime soon.

However, despite my fleeting qualms, I’m ultimately proud of what we achieved.

Wars, after all, don’t always end with unconditional surrenders and victory parades. In our time, we have waged a multi-generational struggle to relentlessly resist the dark forces that exist outside our borders and are always looking for a way to hurt our homeland.

So we never backed down, and we never gave up. Even when it hurt. Even after so much time away from home. Even when we lost friends. Even when we didn’t know what victory looked like. Yes, we kept fighting because evil exists and we knew we couldn’t ignore it.

But the reasons for our service weren’t just about defending the homeland.

You see, I’ve learned one thing as a war correspondent that I never really understood while I was an Air Force pilot: The U.S. military remains the torchbearer for our country’s best values and a beacon of hope for people fighting for their freedom around the world.

Meeting Safeen reminded me of that truth. He reminded me that freedom is worth the fighting for, and that America has friends forever due to the sacrifices of our heroes.

This Memorial Day, that’s a message all Americans need to hear.