The Trans Lobby Is Now Marketing to Your Kids 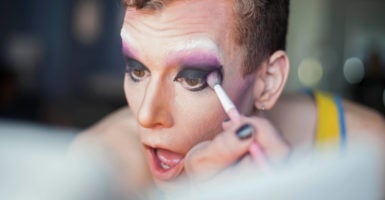 As the LGBT movement continues to grow in power and influence, it has started to market drag and transgender ideology to the most gullible group out there: children.

These efforts normalize concepts that are unscientific and that promote medical treatments that many medical professionals oppose.

Take what happened recently on Mother’s Day. Chips Ahoy!, king of the commercialized, processed cookie, tweeted an endorsement of its product by Vanessa Vanjie Mateo, the name of a well-known drag queen.

“I’m so thankful to have a mother, like mine, who supports me, who loves me through all of my craziness … . What’s a sweet gesture for you to do to your mama? Your real mama, your drag mama, whichever mama … whoever you feel or consider your mama, it’s their day today. Get them a cookie,” Vanjie Mateo said in the clip.

For those unfamiliar, Vanjie Mateo was a star on “RuPaul’s Drag Race,” seasons 10 and 11, which airs on VH1. Vanjie Mateo is featured prominently in drag and in one episode is seen sharing a sneaky kiss with another drag contestant.

While the clip is clearly not an official Chips Ahoy! commercial—at least it doesn’t appear to be given the quality of the film—the brand tweeted something directly aimed at children, portraying “choice,” drag, cookies, and love together as one marketable package.

This is confusing for kids, to say the least.

To clarify, drag queens and individuals who identify as transgender are not the same. In fact, transgender advocates often oppose any correlation. RuPaul Charles, one of the most famous provocateurs who marketed drag to the masses as merely an occasion to play make-believe, said on an episode of “The Real”:

Drag is really making fun of identity. We are shapeshifters. We’re like, ‘OK, today I’m this, now I’m a cowboy, now I’m this.’ … Transgender people take identity very seriously—their identity is who they are.

While this bit of nuance is undoubtedly true, drag “queens” are often gay, and because of their penchant for dramatic dress are placed into the same category of transgender—for good reason.

Many adults, and definitely even more children, do not realize the differences between the two. All children can see, in this case, is a person who looks like a woman but sounds like a man, encouraging them to purchase one of their favorite snacks to give to one of their favorite people: mom.

A Nielsen report backs up this marketing trend and the economic forces that are helping drive it. Nielsen called the LGBT community “a significant contributor to the U.S. economy” and suggested that “savvy companies should plan their strategies accordingly.”

Not only do American LGBT households make 10% more shopping trips in a year than the average U.S. household, they buy more at checkout. In aggregate, LGBT households spent an average of $4,135 at retail stores in 2014—7% more than non-LGBT consumers. This type of spending makes LGBT consumers attractive for marketing appeal across music, sports, TV, and brand sponsorships. Not only are they watching and listening at higher rates than non-LGBT households, but in many cases, they’re also influencing the content and characters in those outlets.

Given those statistics, it’s not surprising that Chips Ahoy! jumped on the LGBT bandwagon to market cookies via a drag queen. Of course, eating a cookie or giving one as a gift is certainly an age-appropriate decision that a child is capable of making. Pursuing “sex reassignment,” however, is not—and it is irresponsible to combine the two into one message.

But cookie ads aren’t the only way kids are receiving the LGBT message. “Drag queen storytime” for children has sprung up at local libraries nationwide. At these gatherings, men, dressed in drag, read books to young children—usually books about LGBT issues, but not always.

The public response has been mixed. While one drag story hour in Louisville was applauded, another in Houston was shut down due to protests.

The drag trend is even spreading to children themselves. “Desmond is Amazing” is an 11-year-old drag kid, a boy who dresses as a girl. He recently posted a video with another adult drag queen in which the adult made a comment about snorting ketamine.

Many LGBT organizations applaud Desmond, despite his age. He has been featured on several talk shows without criticism, communicating the idea that a pre-pubescent boy dressed in drag is not only normal but healthy, and in fact, cool.

Even traditional kids’ shows are now promoting progressive sexual ideas. Less shocking than Desmond, but still pushing the envelope, the cartoon show “Arthur” recently featured a gay wedding in which Mr. Ratburn—Arthur’s third-grade teacher—marries another man. One of the students then praises the union, saying, “It’s a brand new world.”

This prompted congratulatory tweets, even from GLAAD, signifying the cultural significance of such an episode. (Alabama has refused to air it.)

The socialization and normalization of drag queens, transgender ideology, and child cross-dressing is a dangerous trend. This aggressive effort to place LGBT identity and ideology in the center of American culture—through television, marketing campaigns, and social media—is a clear demonstration of how much they want children to accept and embrace their thinking, and even become one of them.

The LGBT community is marketing its lifestyle to children even as more data reveals that children who participate—particularly in transitioning from one gender to another—remain miserable. This article in The Atlantic demonstrated how much pain children go through when they try to pursue sex reassignment due to gender dysphoria, rather than addressing the underlying causes of the dysphoria.

There should be a clear line between adults living according to their beliefs about sexuality and gender, and imposing those beliefs on young children and suggesting that irreversible medical treatments are the answer.

The LGBT movement doesn’t seem to respect that line at all.