Senate Picks Up the Pace in Confirming New Judges 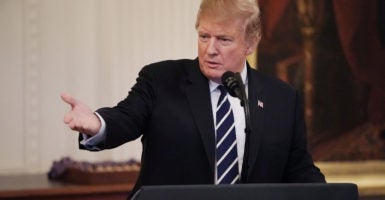 President Donald Trump's pace for making judicial nominations is about one-third slower than during his first two years in office. Pictured: Trump speaks Wednesday in the East Room of the White House before presenting the Public Safety Officer Medal of Valor. (Photo: Chip Somodevilla/Getty Images)

Senate Republicans used the so-called nuclear option April 3 to eliminate one of the Democrats’ tactics for slowing down the process for considering President Donald Trump’s nominees.

In a column here at the time, I wrote that Republicans “need to seize this opportunity so that the government that Americans elected in 2016 can function as it should.”

Let’s look at the record for the three steps in the presidential appointment process: nomination, Senate committee consideration, and full Senate approval.

When Trump took office in January 2017, judicial vacancies had jumped into triple digits for the first time in six years. They are actually 20% higher today.

Fifty-seven percent of those vacancies are designated as “judicial emergencies” by the Administrative Office of the U.S. Courts because they have been open so long and have a negative impact on caseloads.

Trump’s pace for making judicial nominations this year is about one-third slower than it was during his first two years in office. He has made nominations for 43% of the judicial positions that are currently vacant across the country, compared to 45% at this point for President Barack Obama and 84% for President George W. Bush.

The first part of the Senate’s confirmation process takes place in the Judiciary Committee. So far this year, under Chairman Lindsey Graham, R-S.C., the committee has held a hearing for 22 judicial nominees, compared to an average of 19 at this point in the third year of the previous five presidents.

Obviously, the Senate cannot confirm nominations the president has not made or the Judiciary Committee has not approved. The committee must do its part. That said, the most aggressive obstruction tactics occur on the Senate floor.

The first one happens when the Senate must end debate on a nomination in order to take a confirmation vote. This used to happen by informal agreement between the two party leaders.

When the minority won’t cooperate, Senate Rule 22 provides for a formal process that involves filing a motion and taking a separate vote to invoke cloture, or end debate. This can add days to the confirmation timeline, even for nominations that have little or no actual opposition.

As The Heritage Foundation’s Judicial Appointment Tracker shows, the Senate has been forced to take 76 cloture votes on Trump’s judicial nominees, more than 10 times as many as at the same point in the previous five administrations combined.

Republicans’ recent action involved the other part of Rule 22. Even when the Senate has voted to bring debate to a close, the rule allows for “up to 30 hours” of additional debate time.

Democrats have abused this in two ways. First, they refuse to yield back, or shorten, that block of time. Second, they do not then go to the Senate floor to debate the pending nomination. It’s just empty time added to the process for confirming even the least controversial nominees.

On April 3, Republicans voted to reinterpret Rule 22 to reduce the available post-cloture debate time to two hours for nominations to the U.S. District Court and most executive branch positions.

This can have three basic practical effects: The Senate can take multiple cloture votes on the same day; it can take confirmation votes within hours, rather than days, of invoking cloture; and more nominees will be available for confirmation.

Before reducing post-cloture debate, the Senate took same-day multiple cloture votes on Trump’s judicial or executive branch nominations 14 times in 27 months, with an average of two nominees each time.

Since reducing post-cloture debate, the Senate has taken same-day cloture votes eight times in seven weeks, with an average of three nominees each time. In addition, the percentage of nominees confirmed the same day as the cloture vote has more than doubled since April 3.

The most important statistic about the appointment process is the final output of nominees being appointed to positions in the judicial and executive branches. Especially considering the Democrats’ systematic obstruction campaign, which uses these and other tactics, the overall confirmation pace has been reasonable.

The judicial confirmation pace during Trump’s first two years was slightly below the average for the previous five presidents; but so far this year, it is 52% ahead.

The Senate has a lot of work to do. The judiciary is in the longest period of triple-digit vacancies in nearly three decades.

But if Trump returns to a more robust nomination pace, and the Senate takes advantage of its recent action to take one obstruction tactic off the table, the judiciary and the American people will benefit greatly.