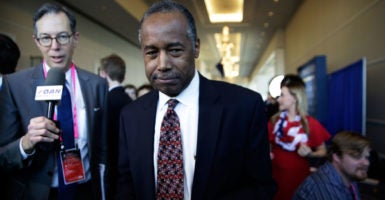 Idiocrats would rather mock Housing Secretary Ben Carson's ignorance of a real estate acronym than own up to their own suicidal stupidity. (Photo: Alex Wong/Getty Images)

We no longer live in a constitutional republic. We live in an idiocracy.

Only in modern-day America, under the Democratic-controlled U.S. House of Representatives, is the basic proposition that federally subsidized public housing should benefit American citizens and legal residents slammed as “despicable” and “damaging.”

Those are the hysterical words used by Democratic Rep. Carolyn Maloney of New York City to condemn the proposal discussed by Housing and Urban Development Secretary Ben Carson on Tuesday to ban government aid to residents of the agency who shelter illegal immigrants.

The rule change would end a Clinton-era regulation that allowed immigrants to obtain aid without having to disclose whether they were here legally. The Trump plan could free up an estimated 32,000 public housing slots, according to the department, as 1.6 million applicants nationwide wait to be considered.

Democratic Rep. Juan Vargas of San Diego County couldn’t believe Carson could be so “mean-spirited” in prioritizing law-abiding people over law-breaking ones.

Only in America are American public servants, who are sworn to uphold American laws and the U.S. Constitution, hounded by open borders liberals about putting Americans first.

Instead of being forced to defend their own twisted and treasonous priorities, Democrats got an assist from open borders tools in the media making hay of Carson’s unfamiliarity with some stupid real estate acronym.

The squirrel-chasers at Newsweek sputtered: “Ben Carson doesn’t know what an REO property is, thinks he’s being asked about Oreos.” Politico clucked, “Ben Carson confuses a real-estate term and a cookie.”

Carson had patiently explained at the House Financial Services Committee hearing that families with illegal immigrants would still have up to 18 months to defer eviction and find somewhere else to live or to move back to their home countries.

But that (undeserved) generosity was met with still more unhinged cries of “What about the children?” from the “America Last” Democrats whose first allegiance is to thousands of anchor babies born here to irresponsible border-trespassers, visa overstayers, and deportation fugitives. They put their own children at risk in the first place. Not us.

You want to engage in “What about-ism?” What about the native-born military veterans? What about the elderly? And what about the destitute citizens down on their luck waiting for public housing slots to open up?

In Maloney’s city, it reportedly takes an average of 99 months for a public housing applicant to secure an apartment.

In Waters’ city, the waiting list for low-income Americans seeking Section 8 vouchers is 40,000 people and up to 11 years long.

In Vargas’ county, the region now boasts the fourth-highest homeless population in the nation.

It is “only logical,” Carson pointed out, to put Americans ahead of the 32,000 HUD-housed residents deemed ineligible because of their immigration status. But logic is toxic to the Make America Disappear Lobby.

When I hear the impassioned paeans of Democrats on behalf of illegal immigrants fighting for their federal Section 8 vouchers, I am reminded of the most notorious deportation-evading denizen of government-subsidized housing: Zeituni Onyango, President Barack Obama’s illegal immigrant aunt, who died of cancer in 2014.

Remember? Onyango was a beneficiary of the welfare state run amok, and a perfect symbol of open borders ingratitude and metastatic entitlement. She overstayed a temporary visa for 14 years, never going home to Kenya. Screw our rules.

Onyango had no job skills, no special talent, and no claim of persecution. She didn’t value the American dream. She was a dependency nightmare. She collected $700 a month in welfare benefits and disability payments totaling $51,000. Somehow, Onyango also drummed up money to apply for asylum and finagled her way into federal and state public housing in Boston.

She gamed the system under both Democratic and Republican administrations, dragged out her phony “asylum case” three times, dodged two deportation orders, illegally donated to her nephew’s presidential campaign along the way, and then eventually secured a green card in 2010.

Such are the perks of illegal immigrant privilege.

In a raging interview she gave to a Boston TV station before she died, Onyango savaged and taunted her American hosts. “If I come as an immigrant, you have the obligation to make me a citizen,” she spouted. “I didn’t ask for it,” she retorted when asked about her public housing benefits. “They gave it to me. Ask your system. I didn’t create the system.”

Well, Obama’s ingrate aunt was right about that: She didn’t create the system. Idiocrats built it. Idiocrats are defending it. And idiocrats would rather mock Carson’s ignorance of a real estate acronym than own up to their own suicidal stupidity.

Here’s the only acronym you need to know if idiocrats prevail: R.I.P., America. R.I.P.