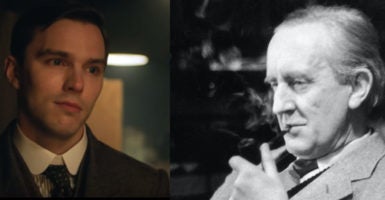 J.R.R. Tolkien as portrayed by Nicholas Hoult, left, and in the flesh in 1955, enjoying a pipe in his study at Merton College, Oxford. (Photos: Fox Searchlight Pictures and Haywood Magee/Getty Images)

The new movie depicting the life of writer, poet, and academic J.R.R. Tolkien is a refreshing display of the beauty of friendship and perseverance in adversity. Yet the film fundamentally disappoints by neglecting to include a defining element of Tolkien’s life—his Catholic faith.

The film centers on Tolkien’s youth, followed by his coming of age against the backdrop of World War I. To its credit, “Tolkien” beautifully captures the impact that the author’s relationships—with his mother, his wife, and his friends—had on his fiction.

Director Dome Karukoski excels at showing how Tolkien’s friendships with fellow students at King Edward’s School in Birmingham, England, carried him through difficult times on the battlefield and later inspired his fiction.

After Geoffrey Bache Smith, one of Tolkien’s childhood friends, is killed in action, Tolkien meets with Geoffrey’s mother to persuade her to allow him to publish Geoffrey’s poetry posthumously.

As they reflect on Geoffrey’s life, Tolkien (played by Nicholas Hoult) shares that of everyone he knew, Geoffrey “embodied best what it means to love and be loved.”

Love, or fellowship as it is put elsewhere in the film, is the main theme. When Tolkien and schoolmates Robert Gilson, Christopher Wiseman, and Geoffrey decide to form the Tea Club and Barrovian Society, Gilson declares: “This is more than just a friendship. It’s an alliance, an invincible alliance.”

Not even death can conquer friendship, as Geoffrey reminds Tolkien in his last letter. “Tolkien” does a masterful job capturing the power of fraternal love.

The film also conjures the horrors of war that haunted Tolkien—the gas attacks, the never-ending fire, the blood-soaked trenches, the unattended dead. It depicts dragons on the battlefield to show how Tolkien’s experience of war inspired the forces of evil in his beloved fantasy books, “The Hobbit” and “The Lord of the Rings” trilogy.

Tolkien understood Christ to be the only satisfactory response to the evils he had witnessed.

“Out of the darkness of my life, so much frustrated, I put before you the one great thing to love on earth: the Blessed Sacrament,” Tolkien wrote in one of 354 letters published as “The Letters of J.R.R. Tolkien.” “There you will find romance, glory, honour, fidelity, and the true way of all your loves upon earth.”

Yet Tolkien’s faith is virtually absent from the film. The only explicit references to Christianity come in the form of Father Francis Morgan (Colm Meaney), a Roman Catholic priest charged with Tolkien’s welfare after his mother dies, and a split-second shot of a large crucifix standing in no man’s land on the battlefield.

In one scene, Father Morgan visits Tolkien as he recovers in a hospital from trench fever. The priest laments that he struggles to comfort the mothers and widows in the ward.

“I speak the liturgy,” he says, and tells Tolkien that the ancient language and customs of the Mass seem to bring people comfort.

Why? “Tolkien” is not inclined to elaborate, but the real Tolkien would surely have plenty to say on the topic. He was not just interested in the liturgy as a philologist, but as a believer. His Christian faith was an integral part of his work.

The Gospels contain a fairy-story, or a story of a larger kind which embraces all the essence of fairy-stories … There is no tale ever told that men would rather find was true, and none which so many skeptical men have accepted as true on its own merits. For the Art of it has the supremely convincing tone of Primary Art, that is, of Creation. To reject it leads either to sadness or to wrath.

For Tolkien, who died in 1973 at 81, faith was the key to the greatest fairy-story, greater even than his masterful “Lord of the Rings.”

To attempt to tell his life story without it, however beautiful the film, means that “Tolkien” is fundamentally incomplete.