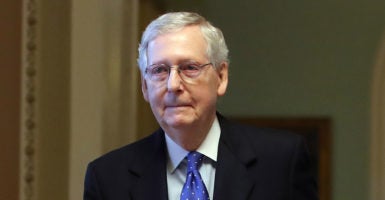 “We’re in the middle of a national health epidemic,” McConnell said in a speech on the Senate floor, according to Fox News. “Youth vaping is a public health crisis.”

The bill, called the Tobacco-Free Youth Act, would raise the age to buy e-cigarettes as well. The legislation comes after the Food and Drug Administration waged war on teen e-cigarette use under the direction of ex-commissioner Scott Gottlieb, who called the issue an “epidemic.”

More than 3.6 million middle and high school students were current e-cigarette users in 2018, a “dramatic” uptick that ended years of decline in overall youth tobacco use, according to an FDA survey published in November.

“Today, we are coming together to side with young people’s health. With this bipartisan legislation, Senator McConnell and I are working to address one of the most significant public health issues facing our nation today,” Kaine said in a statement Monday. “Raising the tobacco age to 21 is a critical part of our efforts to improve public health and keep tobacco products out of schools and away from our children.”

Both McConnell and Kaine represent tobacco-producing states. Although McConnell’s Kentucky has seen falling tobacco production, the state has one of the highest cancer rates in the U.S., according to Fox News.

The bill would implement a policy that 14 states—including Virginia, New Jersey, and Oregon, plus the District of Columbia—have already put in place. The House has its own legislation to raise the smoking age introduced by Democratic Reps. Frank Pallone of New Jersey and Donna Shalala of Florida, reported CNBC.

Kaine, Pallone, and Shalala are pushing to raise the age to purchase tobacco products even as other members of their party introduce legislation to lower the federal voting age from 18 to 16.

The Tobacco 21 campaign received support from tobacco companies, including Altria and JUUL Labs.