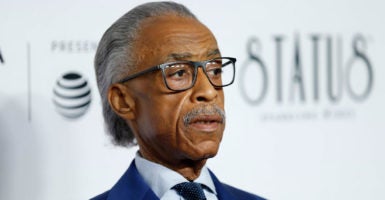 At its commencement next month, the City University of New York will award an honorary doctorate of humane letters to Al Sharpton. (Photo: John Lamparski/WireImage)/ Getty Images)

Most Americans are not aware how morally and intellectually destructive American colleges—and, increasingly, high schools and even elementary schools—have become. So, they spend tens of thousands after-tax dollars to send their sons and daughters to college.

But today, to send your child to college is to play Russian roulette with their values. There is a good chance your child will return from college alienated from you, from America, from Western civilization, and from whatever expression of any Bible-based religion in which you raised your child.

If you think this is in any way an exaggeration, here is some of what has happened on campuses in recent months:

Harvard University fired law professor Ron Sullivan from his position as faculty dean of Winthrop House, a student residential hall, because he was one of Harvey Weinstein’s lawyers. (He has since resigned from the Weinstein legal team.) Some female Harvard students said they felt “unsafe” with Sullivan as a faculty dean.

Also at Harvard, all-black graduation exercises were initiated. And like most other colleges, Harvard has long allowed an all-black student dorm to exist on campus.

If nothing else, this provides additional proof of the vast difference between liberalism and leftism. That is why liberals such as Dershowitz, Tribe, and numerous liberal writers have condemned Harvard’s cowardly capitulation to a few female students.

Unfortunately for America, however, most liberals will not confront the fact that they have far more to fear from the left than from the right. Conservatives are not the enemy of liberalism; the left is.

In Minnesota, some students at South St. Paul Secondary petitioned the administration to allow students to wear sashes—stoles—with ethnic and LGBT colors to celebrate their identities. As one student said in leftist English, “I’m able to repurpose what was once an obstacle into a source of energy and pride.”

As reported in the Minneapolis Star Tribune: “If they’re not allowed to don the sashes, some students have talked about wearing them anyway, said Naomi Gedey, a Black Pride Organization leader. Gedey added that many immigrant students also hope to wear flags of their nations of origin.”

Those who still believe that one of the primary purposes of American public (and most private) schools is to Americanize students should know this is no longer the case. On the contrary, most American high schools now celebrate every identity except American identity (which the left brands a euphemism for white supremacy).

Meanwhile, at its commencement next month, the City University of New York will award an honorary doctorate of humane letters to Al Sharpton.

Among the many nonhumane activities Sharpton has been involved in was the infamous Tawana Brawley hoax, in which he fabricated a charge that four white men had raped a young black woman named Tawana Brawley.

Sharpton also runs a phony civil rights organization called the National Action Network, which has collected many millions of dollars from corporations in what essentially amounts to an extortion racket that enables those corporations to buy racial peace.

And Sharpton helped stoke the Jew-hatred that sparked black anti-Jewish riots in 1991. In a book published in 2006, Edward S. Shapiro, a Brandeis University historian, described the riot as “the most serious anti-Semitic incident in American history.”

In Pennsylvania, the Sabold Elementary School in Springfield announced that its principal will no longer say “God bless America” after the Pledge of Allegiance. The school district released a statement two weeks ago stating that the principal saying “God bless America” “violated the law.”

And of course, college students across the country are increasingly taught, often from their first day at college, that being male and female is a choice, not a biological fact.

Other than Hillsdale and a handful of other colleges and religious colleges, the American university has become nothing more than a left-wing seminary.