‘Unplanned’ Is Driving Abortion Workers Out of the Industry 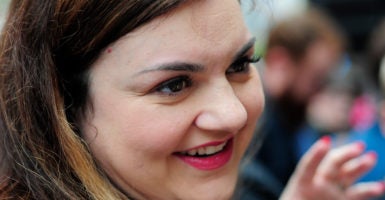 The pro-life movie “Unplanned” surpassed all expectations in theaters, and is now leading abortion workers to leave the industry. In this episode, Rachel del Guidice talks to Abby Johnson, a former Planned Parenthood worker, about the stunning trend. Plus: Alabama is set for a legal showdown after passing a law that bans abortion. Thomas Jipping joins us to unpack what could come next and analyzes the prospects of overturning Roe v. Wade.

Rachel del Guidice: We’re joined on The Daily Signal podcast by Abby Johnson. She’s a former Planned Parenthood employee who had a change of heart and is now a pro-life advocate. Abby, thank you so much for being with us today.

Abby Johnson: Yeah, of course. Thanks for having me.

del Guidice: Your story was recently made into a film called “Unplanned,” which has seen incredibly successful results at the box office, exceeded expectations. How would you characterize the success of the film?

Johnson: It was even surprising to me. You put out something like this, you don’t know how successful it’s going to be. Are people going to go watch it? Are they going to tell their friends about it? Especially a film specifically about abortion.

But it’s done so well, exceedingly well, and people have really been moved by it. They’ve been touched by it. We’ve seen lives saved because of it and lots of conversions taking place, so it’s been pretty amazing.

del Guidice: You mentioned the lives saved and the conversions, and I remember seeing you post it, I think on your Facebook page, that at one point—and I’m not sure if this is still the case—but you said that there were one or two people leaving, clinic workers leaving their clinics per day after seeing this film. Is that still the case, and how has that been attributed to “Unplanned?”

Johnson: Yeah. For awhile we were really experiencing an overwhelming amount of workers contacting us. Since the film is out of theaters now, that’s slowed down a little bit, but we’re now over 500 workers who have come through And Then There Were None.

So many have come through after viewing the film, watching the film, and a lot of them going in as a critic to see what this is all about, and then finding truth in it and saying, “I don’t want to do this anymore either.”

It’s been amazing just to see the fruit and to see all these people’s lives change for the better.

del Guidice: That’s incredible. You mentioned that some of them are going in as critics. Have any of them mentioned to you—other than wanting to go in as a critic—anything that intrigued them to the film? I’m sure in some cases it was definitely going against their own beliefs to step out and see this film.

It’s been sort of different, different stories there. But yeah, they definitely were instructed not to see the film by Planned Parenthood.

I think that it’s just sort of like that “Do not push that big red button.” And you’re like, “Why don’t you want me to see this? What’s in it that you don’t want me to see?” So I think that was enough to intrigue a lot of people to go and watch this.

del Guidice: Wow. Was there a particular scene that they say impacted them to the point of eventually precipitating their choice to leave, or a discussion they had afterward? Was there anything? Or is there a common theme that clinic workers have said really was the turning point for them in the film?

Johnson: Definitely the ultrasound-guided abortions. A lot of them have seen that themselves.

It’s sort of different to remove yourself from what you do every day and to look at it sort of as an outsider, and I think that’s what they were forced to do. And then to see, to hear how everyone else in the theater is impacted by that scene.

One of the gals that contacted us said, “I just … heard everyone gasping and I thought to myself, ‘Oh my gosh, this really isn’t normal, what I’m doing every day. This isn’t normal. I’ve been trained to believe that it is, but it’s not.'”

So I think the reactions of other people was very powerful for them to hear. And I think definitely we’ve heard that the RU-486 abortion scene, my abortion scene, the medication abortion, was very impactful for them. Because a lot of them, they’re hearing stories of women who are coming back and saying, “This is not what you told me would happen. This was terrible.”

del Guidice: Wow. That’s incredible. Is there a favorite story you’ve heard so far of maybe one or two clinic workers that have left that you could share anonymously? Someone who’s come forward and saw the film and has just been completely changed? Any particular story that stands out among the hundreds that have left?

Johnson: There was one actually. There was a man that contacted us. He went to go see the film and he was driving a truck for Stericycle. There was a scene at the end of the film where the guy from the biohazard medical waste company comes out with these barrels of aborted babies, and he had just started working there, and there was a Planned Parenthood clinic on his route.

He said, “I never realized what I was actually picking up. I thought I was just picking up needles and things like that, but I went and looked up and they actually are an abortion clinic, and so inside of these bags that I’m toting out, I’m realizing that there are aborted babies in these bags, and I’m driving around with them.”

He was like, “How can I participate in this? I have to get out of it.” He had just gotten this job. He had been unemployed for months, and he said, “I can’t do this anymore. I can’t be complicit. I have to walk away.”

He took this huge leap of faith, trusted our ministry, left, and I love that story because it just shows how abortion affects so many people, not even people that are just in the clinic, but this Stericycle driver.

del Guidice: Wow. That is absolutely beautiful. For listeners who aren’t familiar, can you just share briefly about what And Then There Were None does and the outreach that you guys do to so many people across the country?

Johnson: Sure. We help doctors, nurses, ancillary staff, anyone who is involved in the abortion industry, we help them transition out of their jobs and into different lines of work, life-affirming work.

We do provide transitional financial help for them because we don’t want them to feel like they have to stay until they’ve found another job. Once they realize, “I want out of here,” we want them to go ahead and leave.

We also have attorneys. We have over 3,000 attorneys located in every state that are willing to work with our employees. A lot of times the workers leave, and they will say, “Well, I know something that was going on that was illegal.”

We get them in contact with an attorney, and because of that, we’ve helped to close down 21 abortion facilities because of the work of these pro-life attorneys coupled with the stories and the experiences that these workers have whenever they leave.

del Guidice: That’s incredible. If listeners want to get involved by supporting you guys, or if a clinic worker is listening or knows someone who might want to reach out for support, where would you ask them to go to?

Johnson: They can go to abortionworker.com.

del Guidice: Awesome. Abby, thank you so much for joining us today.

Johnson: Of course. Thank you.