Today’s Left Is Worlds Apart From the Old Progressivism 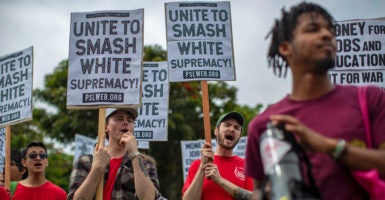 The following post is part of a symposium titled “Multiculturalism vs Patriotism,” which features an essay by Thomas D. Klingenstein and responses by David Azerrad, Matthew Continetti, Allen C. Guelzo, and Roger Kimball. The symposium appears in the Spring 2019 issue of the Claremont Review of Books and is available for immediate access here.

Thomas Klingenstein has written a cri de coeur against the most powerful, pernicious, and suicidal ideology of our time: multiculturalism.

Klingenstein sees it for what it is—“an insane exercise in self-flagellation” fueled by a hatred of America in general and of white men in particular.

He understands its formidable power to silence and destroy publicly those who deviate from the accepted script when speaking of protected identity groups. And he is therefore right to call on conservatives to see it as “the central issue and threat—the communism or slavery, as it were—of our time.”

I am particularly pleased that he published his essay in the pages of the Claremont Review of Books, since it provides a much-needed corrective to the orthodox Claremont account of America.

We “Claremonsters” have for too long tried to interpret modern liberalism through the lens of early American progressivism. Multiculturalism cannot, however, be read as a working out of the ideas of President Woodrow Wilson, Richard Ely, Charles Merriam, or any other of their progressive acolytes.

The leading progressive luminaries of the early 20th century believed in the superiority of the Teutonic races and their rightful title to rule not just America, but the world. Wilson defended segregation and celebrated the end of Reconstruction for re-establishing “the natural, inevitable ascendancy of the whites, the responsible class.”

In his “A History of American Political Theories,” Merriam exhorted Teutonic races to adopt “a colonial policy” and “civilize the politically uncivilized.”

At best, progressives favored benevolent paternalism vis-à-vis what they viewed as inferior races. At worst, “barbaric races” who could not be civilized would have to “be swept away,” as Merriam casually noted.

However much progressivism may explain the workings of the modern administrative state, it cannot account for the current cult of diversity and the mounting hatred for all things white. No early progressive would have called on anyone, much less a sitting president, to resign for calling certain Third World countries “s—holes.”

Not surprisingly, the contemporary multicultural left has turned against the early progressives. The arch-progressive Wilson, on whom we in the Claremont school have put so much weight, is now despised by the left. In the summary judgment of The Atlantic: “The Virginia native was racist.”

These ideological movements presented a new critique of America as a fundamentally oppressive regime which subjugates certain groups and stifles authentic living.

Their scathing indictment of the country first made headway with women, minorities (as they would now be called), and the nascent gay liberation movement, before penetrating mainstream culture.

The victory was sealed when members of the so-called oppressor class, for reasons that have yet to be explained, accepted the critique and came to think of themselves and their country through this lens, giving rise to the self-flagellation which Klingenstein condemns.

Klingenstein identifies “the principle that all ‘marginalized’ identity groups are equal, and all are oppressed by white males” as the leading principle of American multiculturalism.

This is not entirely correct as multiculturalists embrace a hierarchy of victimhood. No social justice warrior has as much sympathy for Asian-Americans as she does for African-Americans.

Women who do not want to compete against transgender men in athletic competitions are told to shut up and check their transphobia.

And the Jews, who were once almost exterminated for not being white, are now starting to be called “white Jews” to underscore their privilege.

More importantly, the now-fashionable concept of intersectionality recognizes that people can be oppressed along multiple axes at the same time.

This originally appeared in the Claremont Review of Books.